Novak Djokovic dismissed Ivan Dodig of Croatia 6-4 6-3 in the Paris Masters, showing no signs of the shoulder injury that bothered him last weekend. 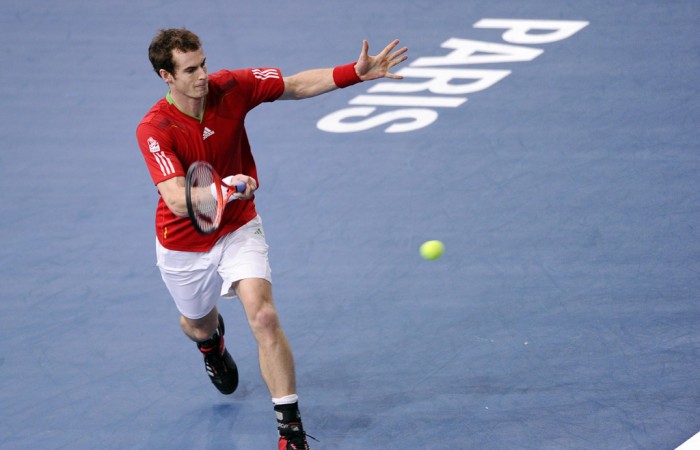 Novak Djokovic dismissed Ivan Dodig of Croatia 6-4 6-3 in the Paris Masters second round on Wednesday, showing no signs of the shoulder injury that bothered him last weekend.

The top-ranked Serb had complained of shoulder pains in his semi-final loss to Kei Nishikori in Basel.

“I took the necessary measures in the last couple of days in order to recover (and) play in this tournament,” Djokovic said.

“I’m feeling good on the court and that’s what matters.”

If Djokovic hadn’t played in Paris, he would have lost a $US1.6 million ($A1.58 million) bonus paid to the year-end No.1 player for appearing in seven of the eight mandatory Masters events.

The Serb didn’t play in the Shanghai Masters last month because of injury.

Dodig dropped serve at 5-4 with a backhand error to lose the first set. Djokovic hit a crosscourt backhand winner on the line for a 4-2 lead in the next, clinching victory with an ace.

“It’s obvious that I’m still not on top of my game,” Djokovic said. “But I’m taking things quite slowly, step by step, knowing that the form will improve each day that I play.”

Djokovic will next play compatriot Viktor Troicki, who beat Sergiy Stakhovsky of Ukraine 6-4 6-4.

Andy Murray and Roger Federer also moved into the third round.

Murray improved his record to 16-0 since the US Open by beating Jeremy Chardy of France 6-2 6-4, and Federer cruised past French wildcard Adrian Mannarino 6-2 6-3.

Murray, who last lost to Rafael Nadal in the US Open semi-finals but has won 26 of 27 matches since mid-August, jumped out to a 4-0 lead in the first set.

In the second set, the second-seeded Briton broke serve at 2-2 on a double-fault from Chardy and held on to win when a backhand volley from the Frenchman sailed wide.

Murray will next face Andy Roddick.

While some players have complained about the slowness of the surface, Federer wasn’t among them.

“In Paris, it’s faster than (four) years ago when I lost against (David) Nalbandian,” Federer said. “It was almost like the French Open No.2.”

Mardy Fish is just one win away from securing his spot for the ATP World Tour Finals after routing Florian Mayer of Germany 6-1 6-2.

David Ferrer of Spain, Janko Tipsarevic of Serbia, Alexandr Dolgopolov of Ukraine and John Isner of the United States also won in straight sets to advance.

The fourth-seeded Ferrer beat Nicolas Mahut of France 6-4 6-4 and will next meet Dolgopolov, who downed Philipp Kohlschreiber of Germany 6-3 7-6 (8-6).

The 11th-seeded Tipsarevic defeated Alex Bogomolov Jr of the United States 6-1 6-0 and will next play Tomas Berdych of the Czech Republic.

Nicolas Almagro of Spain and Frenchmen Gael Monfils and Gilles Simon were the only seeded players to lose on Wednesday.