Novak Djokovic on Monday continued his waiting game with a recent shoulder injury which threatens to keep the world number one out of this week's Paris Masters. 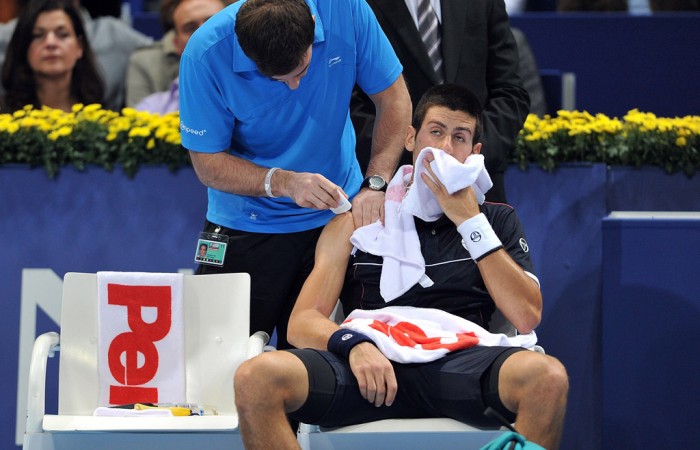 Novak Djokovic on Monday continued his waiting game with a recent shoulder injury which threatens to keep the world number one out of this week’s Paris Masters.

The Serb injured his right shoulder again in a Basel semi-final loss at the weekend and remains unsure of his participation in the last event of the ATP regular season.

With the elite World Tour Finals starting in less than a fortnight in London, Djokovic’s immediate future on court remains wide open.

Djokovic, winner of 10 tournaments this season, is due to start his tournament play on Wednesday in the second round against either Italian Fabio Fognini or Croatian Ivan Dodig.

Roger Federer arrived in Paris after a fifth Basel title and was due to practice with Frenchman Gael Monfils, who lost in last year final to Robin Soderling.

The last three spots in the Tour Finals are to be decided this week, with Czech Tomas Berdych, Jo-Wilfried Tsonga of France and American Mardy Fish filling the spots provisionally.

In what could be a foretaste of one of the rubbers at next February’s Davis Cup first round tie, with Canada hosting the French, hinged on a third-set break of Raonic and ended with back-to-back drop shot winners from Benneteau.

“I don’t think it was really that bad today. He just played really well and played better than me. He took his chances, and he capitalised on his opportunities,” said the Canadian.

“I only had one breakpoint, but in a lot of games I was getting halfway there, but I wasn’t converting.

“It was just tough, I didn’t get my opportunities. The game he broke me, he hit three winners.”

Verdasco will be the first test for Berdych while Garcia-Lopez will play Tsonga, seeded sixth.