McEnroe and Rafter to play in Adelaide

John McEnroe and Pat Rafter will headline the 2012 World Tennis Challenge to be held 10-12 January at Memorial Drive in Adelaide. 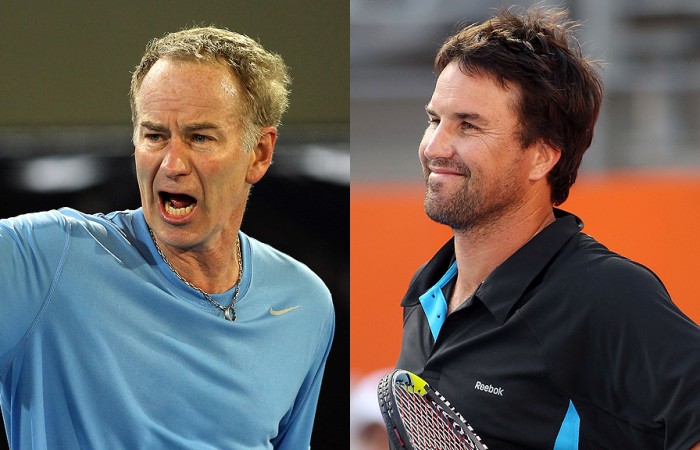 World Tennis Challenge Directors today announced the strongest line up for the fourth event to be held 10-12 January 2012 at Memorial Drive.

“We are thrilled Australia’s Davis Cup captain and house hold name Pat Rafter has signed onto play the tournament.  We know how competitive John is, and after Pat winning last time (8-6) we are anticipating sensational tennis between these two great legends” said Rasheed.

“McEnroe’s return to Adelaide is a coup for the event and South Australians continue to embrace him” Rasheed continues.

To partner John McEnroe in Team America former Top 5 player and ‘sexiest man alive’ nominee James Blake has confirmed his participation with Alexandr Dolgopolov (ATP ranked No.16) partnering Rafter in Team Australia, fittingly due to his connection with his coach being Adelaide’s Jack Reader.

Crowd favourite Henri Leconte, coach of Gael Monfils will partner with Michael Llodra (ATP ranked No.29) which is assured to entertain crowds due to their wit and skilful shots in Team Europe.

The World Tennis Challenge is also excited to have enticed one of the game’s greatest strategists, Brad Gilbert best known as former coach of Agassi, Roddick and Murray to represent Team International.  Brad is back from behind the commentary mic – and partnered with 2011 Australian Open Quarter Finalist Stanislas Wawrinka (ATP ranked#19).

The incredible Mansour Bahrami, the ‘world’s greatest tennis entertainer’ will play as wildcard.

“Last year the WTC and associated Be Active Challenge participation event attracted 3665 visitors, generating more than $4.1 million in visitor expenditure for the state and an attendance of 15,122 people,” the Minister said.

“The event was broadcast live via Fox Sports, with an additional 35 hours of replay coverage into 30 countries.

“I congratulate the organisers on again attracting a quality field of players to entertain spectators, promote tennis and deliver tourism benefits to South Australia.”

The full player line up for the 2012 World Tennis Challenge is: