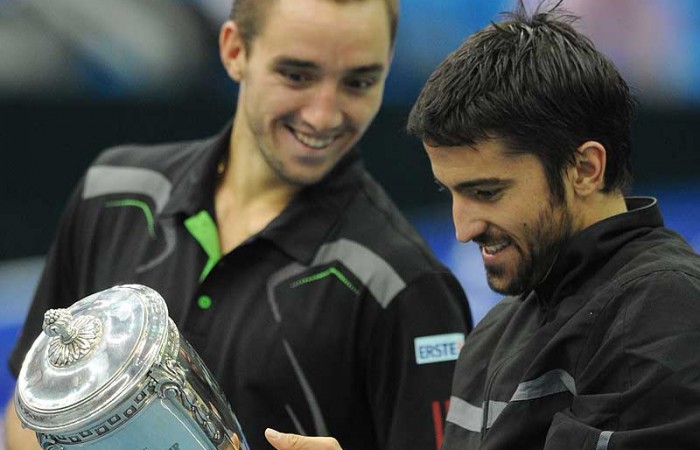 Earlier, eighth seeded Slovak Dominika Cibulkova battled back from a set down to win her first ever title beating Kaia Kanepi of Estonia in the WTA final.

Tipsarevic, 14th in the ATP rankings, prevailed 6-4 6-2 in one hour 28 minutes to dethrone Troicki and level their head-to-head record at 1-1.

“It’s definitely my career best season as I claimed two titles this year,” Tipsarevic, who also played in the 2009 final here, said.

“It was much more a kind of a mind game today as Viktor (Troicki) and me know each other very well being very close friends off the court. But I’m very happy to win that game.”

Tipsarevic, 27, who suffered a straight-set defeat at the hands of Troicki in their only previous clash here in 2008, broke his rival’s first serve for a 2-0 lead.

Troicki replied with a break in the fourth game to level at 2-2 but Tipsarevic produced another break in the ninth game to claim the opening set in 44 minutes.

In the second Tipsarevic, who lifted his first title at Kuala Lumpur earlier this year, underlined his dominance on the hardcourt of Moscow’s Olympic indoor stadium, breaking Troicki serve twice again to win the set, the match and his second ATP title.

“I’ve been close to this win for a long time and I’m so happy to finally clinch my first title,” Cibulkova said.

“It’s the end of the season, which is probably my career’s best. It just couldn’t finish better as I finally got my first WTA win after finishing runner-up in Linz last week. I’m really happy now.”

Kanepi, 26, who won her first WTA title last year in Palermo, looked slightly more focused from the start breaking halfway into the opening set for a comfortable 4-1 lead.

Cibulkova, who lost all three of her previous WTA finals, including her runner-up finish in Linz last week, failed to close the gap leaving Kanepi with a one-set lead after 41 minutes.

No big serves were produced in the second set, which went to a tiebreak with Cibulkova proving the more accurate to level at one set all after one hour 37 minutes.

In the deciding set the 22-year-old Slovak produced three breaks to win the set and the match.