Bernard Tomic has let slip an opportunity to claim another top 10 scalp, relinquishing a break of serve in the final set to go down to France's Gael Monfils at the Stockholm Open. 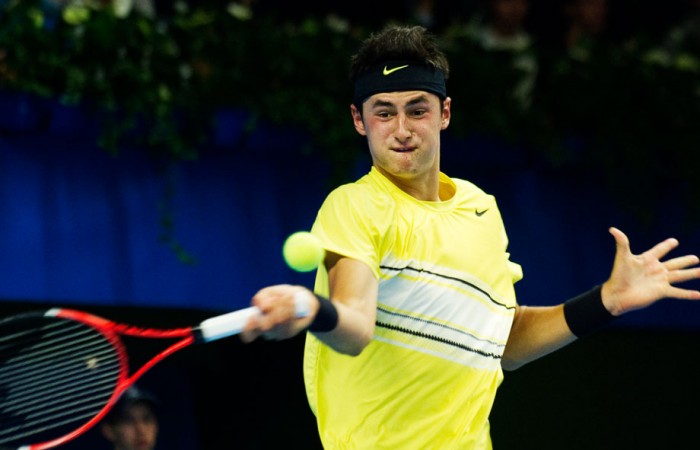 Bernard Tomic has let slip an opportunity to claim another top 10 scalp, relinquishing a break of serve in the final set to go down to France’s Gael Monfils at the Stockholm Open.

The top-seeded Monfils, and last man standing in the leading four at the Kungligahallen, trailed by a break in the third set before breaking the Australian teenager for 4-all.

He then sealed a 5-4 lead with his 18th ace before reaching the quarterfinals on his third match point.

Tomic had downed the eighth ranked Mardy Fish in Shanghai last week but couldn’t finish off the job on Monfils who is competing for the first time in a fortnight after a knee injury suffered in Bangkok.

Monfils is one of the last possible contenders in the points race to reach the eight-man World Tour Finals in London from November 20, with a provisional place of 15th.

The flamboyant French player has three more tournaments this season, giving him chances to rise in the table.

“I hope to finish the year very strong,” he said.

“It was a tough battle tonight. He’s a good young player, I needed time to adjust after time away. I had a big drop in the second set, but I’d been playing well until then.

“I need a few more matches before I can win in straight sets. I need to improve my concentration, but I did a pretty good job today.”

Monfils will play South African sixth seed Kevin Anderson for a place in the semi-finals.

The exit of the Swiss in 71 minutes followed the defeat of fourth seed Juan Ignacio Chela, who was beaten by Bulgarian youngster Grigor Dimitrov 6-2 5-7 6-1.

No.2 Juan Martin Del Potro was beaten on Wednesday in his opening match.

Wawrinka, ranked 19th, suffered another year of bad luck in the Swedish capital after losing a year ago in the quarter-finals to compatriot Roger Federer.

He smashed a racquet near the end of his ordeal against Nieminen, a finalist in 2001 and 2006 and playing the event for the 12th consecutive year.

The 73rd-ranked Finn will be competing in his second quarter-final in a month after reaching the last eight in Bangkok when he will face German Tobias Kamke, who beat Sebastian Rieschick 6-3, 6-1.

Dimitrov, a 20-year-old tipped for a top career, admitted to a lapse against Chela after leading a set and 2-0.

“I started struggling a bit and he raised his game,” said the 70th-ranked Bulgarian.

“It will be a great match, I know him well and will have to be on my game.”