Tomic into Shanghai second round

Wimbledon quarter-finalist Bernard Tomic is into the second round of the ATP Shanghai Masters. 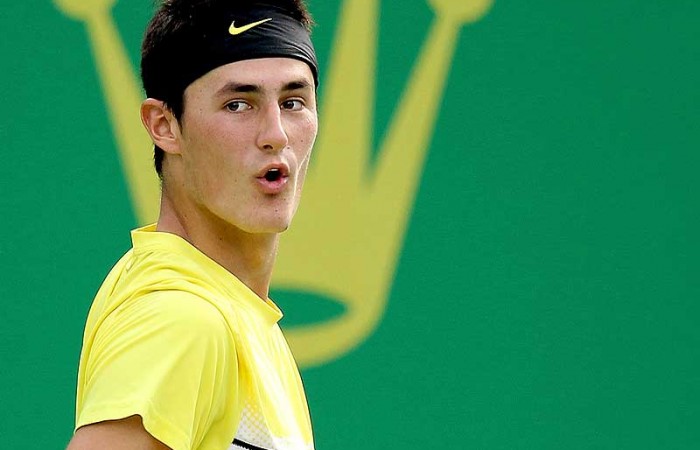 Wimbledon quarter-finalist Bernard Tomic is into the second round of the ATP Shanghai Masters.

“I’m happy I won against a player like Kevin because he can beat so many world class players on his day,” said Tomic, who achieved a career-high ranking of 49 on Monday.

“I was happy to break him in that third and I think that’s what won the match.”

The American 10th seed, who lost to Lu at Wimbledon last year in their most recent meeting, started the match in blistering form, breaking twice and racing into a 4-0 lead, taking the first set 6-2.

But the world number 74 hit back strongly in the second set, striking a stunning two-handed backhand down the line to force a break for a 3-1 lead, which proved enough to level the match against an erratic Roddick.

Clearly unsettled, the American voiced his frustration at noise and movement in the sparse crowd and at a ball boy, but he refocused and crucially broke in the fourth game of the decider.

Roddick, ousted from the first round of the Beijing Open by South Africa’s Kevin Anderson last week, kept his grip as the Lu challenge faded, breaking again to seal the match in a little under two hours.

Nalbandian, a member of the Argentinian team that beat Novak Djokovic’s Serbia in last month’s Davis Cup semi-finals, has slipped to 57th in the world rankings after an injury-plagued season.

But the 29-year-old was too good for his higher-ranked opponent, breaking Gulbis (ranked 51) twice in the first set and then once more in the second set to seal the win.

Top seeds Rafael Nadal and Andy Murray, who met in Sunday’s Japan Open final, won by the British player, both have byes into the second round.

Nadal will open his campaign against Guillermo Garcia-Lopez after his fellow Spaniard defeated India’s Somdev Devvarman 6-4 6-3.