A host of Aussie tennis greats and Swiss superstar Roger Federer made for a pretty impressive guest list at Wednesday night's Davis Cup dinner in Sydney. 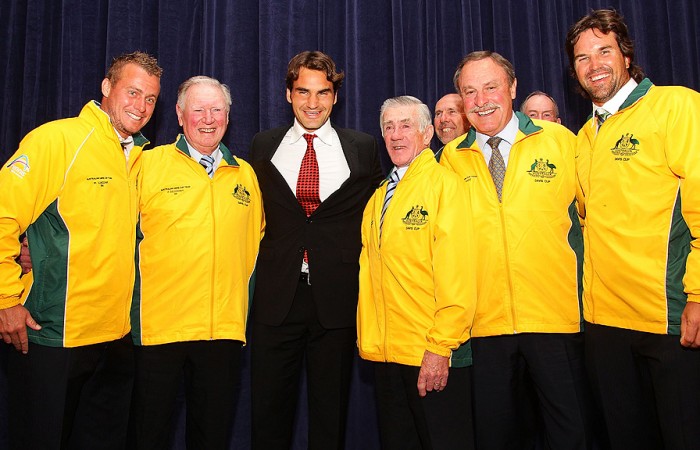 A host of Aussie tennis greats and Swiss superstar Roger Federer made for a pretty impressive guest list at Wednesday night’s Davis Cup dinner in Sydney.

Earlier in the day, Federer made light of a long flight, warm Sydney weather and short preparation time, as he blew out the jet lag cobwebs before leading Switzerland’s Davis Cup assault against Australia.

The winner of a record 16 grand slam singles titles, Federer arrived on Wednesday following his emotional and gruelling five-set loss to Novak Djokovic in the US Open semifinals on Sunday.

After stopping over in Dubai for one night, Federer has only two days to adjust to the grasscourts at Royal Sydney Golf Club before the World Group playoff tie.

The Australians had their practice session on Wednesday before Switzerland, as a large media posse gathered in anticipation of Federer’s arrival.

A few hours after arriving in Sydney, Federer spent around one-and-a-half hours hitting with his teammates on an outside court.

Federer quickly ticked off all the potential irritant factors after fielding a few questions, as he stopped to sign autographs for some star-struck kids.

He was asked about the long journey to Australia and also the weather.

“For a long flight, it seemed pretty good actually,” he said.

“It’s nice isn’t it? I was expecting colder.”

The 30-year-old star was philosophical about having just two days to prepare for a different surface following his US Open campaign and such a long journey.

“Well, usually we never have that much time to get used to the grass anyway, so that’s kind of how we have to do it every year for the grass season, anyway, so I’m kind of used to it,” Federer said.

“The grass [here] is pretty good. It wasn’t centre court now, so I don’t know how that plays, but we’ll see how it goes tomorrow.”