Sam Stosur is Australia's first female grand slam singles champion in 31 years after pulling off a stunning upset over Serena Williams in the US Open final. 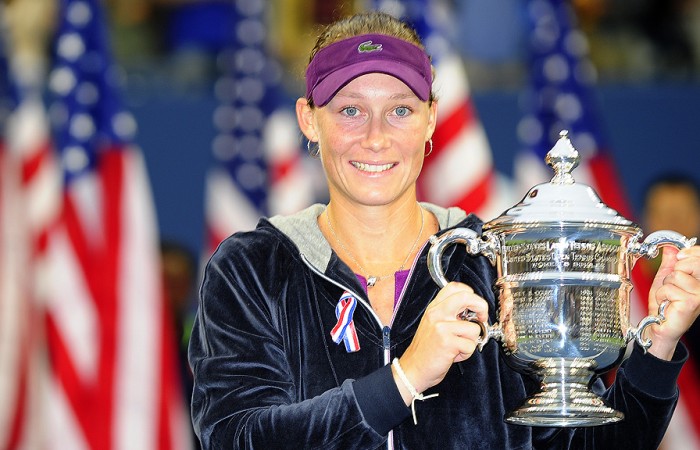 Samantha Stosur is Australia’s first female grand slam singles champion in 31 years after pulling off a stunning upset over a ranting Serena Williams in the US Open final.

Stosur produced the match of her life against 13-times grand slam champion Williams and won 6-2 6-3 in one hour and 13 minutes in front of 23,000 people on Arthur Ashe Stadium on Sunday.

The result made her Australia’s first grand slam champion since Evonne Goolagong Cawley secured her second Wimbledon title in 1980.

It was the first time the nation had claimed the women’s singles crown at the tournament since Margaret Court Smith in 1973.

“I think I had one of my best days so I guess I’m very fortunate to have been able to do it on this stage in New York where I’ve always loved to play, so thanks everyone,” Stosur said.

“Ever since I really started playing and knew what a grand slam was, this was always a dream of mine to be here one day and I don’t really know what to say or how how I’m feeling.”

The composure Stosur showed in capturing her maiden grand slam revived memories of Lleyton Hewitt’s win in the final on the very same court against Pete Sampras a decade ago.

However the match was not without controversy with Williams berating the chair umpire after receiving a one-point penalty for verbal hindrance.

Williams walked out onto court following emotional September 11 tributes ahead of Stosur, with the players hitting up in light rain.

Fortunately for under-fire officials, it did not last long and play started on time with a calculating Stosur taking advantage of a nervous Williams to capture the first set in 31 minutes.

However the match looked like turning at the end of the opening game of the second set following the controversial decision by the chair umpire.

Williams shouted “come on” just as Stosur went to hit a ball on the baseline and the chair umpire penalised the American under the hindrance rule.

The decision handed Stosur an early break of serve and it infuriated Williams as she directed some sharp words at the chair umpire.

It also woke up the crowd who booed the decision and a fired-up Williams then broke Stosur’s serve for the first time in the match.

“If you ever see me walking down the hall, walk the other way,” she said to chair umpire Eva Asdaraki at the next change of ends.

“You’re unattractive on the inside … I never complain… You give me a code violation for expressing my emotions, we’re in America!”

The incident revived memories of Williams’ ugly outburst at a lineswoman during her semi-final loss to Kim Clijsters at the 2009 US Open.

Williams even referenced it in her initial outburst to Asdaraki on court.

“Aren’t you the one who screwed me over last time?,” Williams bellowed.

“That is totally not cool.”

The incident seemed to rattle Stosur for a couple of games but she held tough and took a break for a 4-3 lead in the second set.

“I felt the noise going right through my chest it was so loud I didn’t really know what to think I just tried to stay calm and think about the next point,” Stosur told Fox Sports.

“Obviously that fired her up a bit and I was hoping she wasn’t going to get too angry and start playing unbelievable … I was just happy I was able to close it out.”

The Queenslander yelled out “Come on” as she took a 5-3 lead before taking the match on her third championship point by ripping a forehand winner.