Samantha Stosur is the first Australian woman in a generation to reach the US Open semifinals after crushing world No.2 Vera Zvonareva 6-3 6-3. 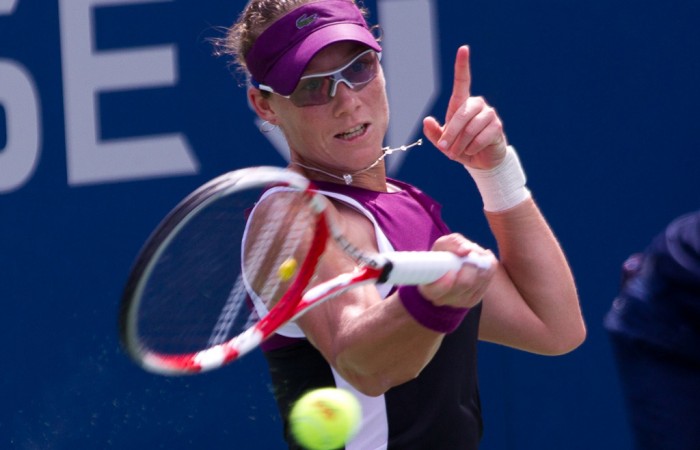 Samantha Stosur is the first Australian woman in a generation to reach the US Open semifinals after crushing world No.2 Vera Zvonareva 6-3 6-3.

The 27-year-old Queenslander produced one of her finest grand slam performances against last year’s finalist at Flushing Meadows, combining her power game with some exquisite shots in her 67-minute victory.

In the re-jigged schedule due to this week’s rain, she will play world No.92 Angelique Kerber in Saturday’s semifinal following the German’s three-set win over Italian 26th seed Flavia Pennetta.

Stosur and Kerber will play for a spot in Sunday’s final against either world No.1 Caroline Wozniacki or hot favourite Serena Williams on the 10th anniversary of the 9/11 terrorist attacks.

Australia has not had a women’s Grand Slam champion since Evonne Goolagong Cawley captured her second Wimbledon title in 1980.

Stosur is the nation’s first woman to reach the final four at the US Open since Wendy Turnbull in 1984.

“That’s the year I was born, so that’s good,” Stosur said.

“Any time you can get a result like this in a slam is obviously very pleasing.

“To have not had good grand slam results this year up until this tournament, obviously I wanted to try to do a lot better here.

“Hopefully I can keep it going for a couple more days.”

After having the match pushed back by 48 hours because of the bad weather in New York, Stosur made a storming start in front a few hundred fans on the Grandstand – the site’s third biggest court.

The Australian entered the match on the back of seven straight wins against the Russian and put her on the back foot from the outset.

She produced some phenomenal returns against Zvonareva in the sunny conditions and cracked her opponent in the sixth game of the opening set.

Stosur was in the zone at the end of the first set and beginning of the second set with the Russian unable to cope with her heavy ground strokes.

The Australian felt in total command of the match at times, with the normally-restrained competitor unable to stop a smile coming out after capturing a break early in the second set.

“To win 12 straight points against the No.2 player in the world is always a good thing,” she said.

Stosur did not have to defend a single break point on her serve as she closed out the match by breaking Zvonareva’s serve for a third time.

A delighted Stosur put her hands on her head at the end of the match, happy to have dismissed her third Russian opponent in a row with ease following marathon matches in the third and fourth rounds.

“To play the way I did today after the long waiting around that we had to do was really, really pleasing,” Stosur said.

“To do it against Vera, who is a quality opponent is a really good feeling.”