Top tennis players at Flushing Meadows hit out at US Open officials today. 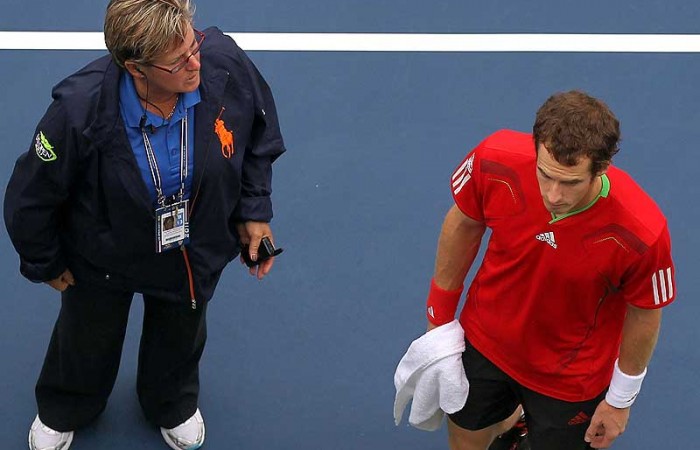 Their fourth round matches lasted only a quarter of an hour before they were hauled off as rain halted play again in New York following Tuesday’s washout.

Nadal was particularly incensed by having to play in misting rain and accused officials of putting profits before player safety.

“We don’t want to go on court if it is raining,” Nadal told ESPN.

The Spaniard was trailing 3-0 to Luxembourg’s Gilles Muller on Arthur Ashe Stadium when they had to exit the court as conditions deteriorated.

Murray, who was trailing 2-1 to American Donald Young on Grandstand court, said the conditions were not safe.

“It’s dangerous. The lines get really slippy. Players want to play more than anyone, but not when it’s dangerous,” he said.

Roddick, who was 3-1 up on fifth-seeded David Ferrer, said the players’ concerns had to be balanced out against the commercial need to put live action on television.

“I think if it’s up for discussion, if the court’s playable or not, then it’s not playable,” the 2003 champion said.

“Walking out there, it was still misting. The back of the courts were still wet.

“We wanted to make it known we didn’t want to be put in that position.

“I certainly understand they need to put tennis on TV, I understand the business side of it as well but, first and foremost, the players need to feel comfortable and safe.”

It will be interesting to see how officials handle putting players back on court following the stand taken by Nadal, Murray and Roddick.

The backlog of matches is becoming a major headache for organisers with rain forecast for the next four days.

Australia’s Samantha Stosur had to continue to wait for her quarter-final against last year’s finalist Vera Zvonareva on Wednesday, that clash to follow Roddick’s match on Louis Armstrong Stadium.

The United States Tennis Association reacted to the player revolt by putting out a statement that said the body always listened to the concerns of players.

“We have experienced referees, and they decide if courts are fit for play,” it said.

“Conditions may be not ideal, but still can be safe.

“However, if a player or players feel that conditions are unsafe, we listen to them, as we have always done, and the referee uses that information as part of his/her assessment on whether to continue or halt play.”