An out-of-sorts Bernard Tomic has been humbled 6-1 6-0 6-2 by Croatian Marin Cilic in just 80 minutes in their US Open second round match. 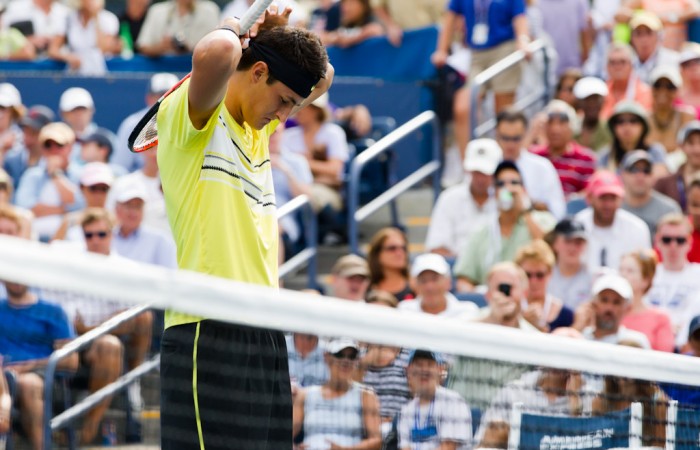 Bernard Tomic described his 6-1 6-0 6-2 US Open humbling at the hands of Croatian Marin Cilic as “just one of those days”.

This year’s Wimbledon quarter-finalist came back to earth with a thud in the 80-minute second round hiding on court 17 at Flushing Meadows.

The 18-year-old said the scoreline was “insane” and that Thursday’s hammering was his worst defeat during his short time in the sport’s top-flight.

Tomic denied there was anything wrong with his health despite a lethargic, error-riddled performance in New York against the 27th seed and 2010 Australian Open semi-finalist.

“I did not quite feel good out there the way he was playing me,” Tomic said.

“He was all on top of me there was nothing I could do and it was just one of those days where the guy just played much much better than me.”

His demise was part of a dirty day for Australia as American world No.103 Vania King upset 29th seed Jarmila Gajdosova 6-2 6-0 and Jelena Dokic was bounced out by 2008 finalist Jelena Jankovic 6-3 6-4.

Tomic left the court for treatment after the first set in New York and called the trainer midway through the second set for further assistance.

He said he called for help in an effort to try to change the momentum in the lop-sided contest.

However, nothing was able to lift him out of his malaise as Cilic strolled through to a third round clash with five-time champion Roger Federer.

But this time around Cilic showed he had learnt how to cope with Tomic’s quirky game by mixing up his play as he broke Tomic’s serve on eight occasions.

His father and coach John Tomic tried to lift his son with encouragement from the stands but the young Queenslander was unable to show anything like the form that saw him become the youngest Wimbledon quarter-finalist in a generation.

“That scoreline was insane but he deserved it the way he played,” Tomic junior said.

Federer warmed up for his third round match by dismissing Israel’s Dudi Sela 6-3 6-2 6-2 in one hour and 17 minutes earlier on Thursday.

Following his result and before Tomic walked on court, Federer had said that he wanted to play Tomic.

“I’d like to play Bernard for the first time because I’ve never played him before,” Federer said.

“I like, you know, playing the new generation coming up.”

His wish was not to be fulfilled.

Dokic’s lack of practice due to shoulder problems returned to haunt her as she produced 15 double faults in her loss on Louis Armstrong Stadium.