Bernard Tomic is one win away from a mouth-watering potential third round showdown with Roger Federer at this year's US Open. 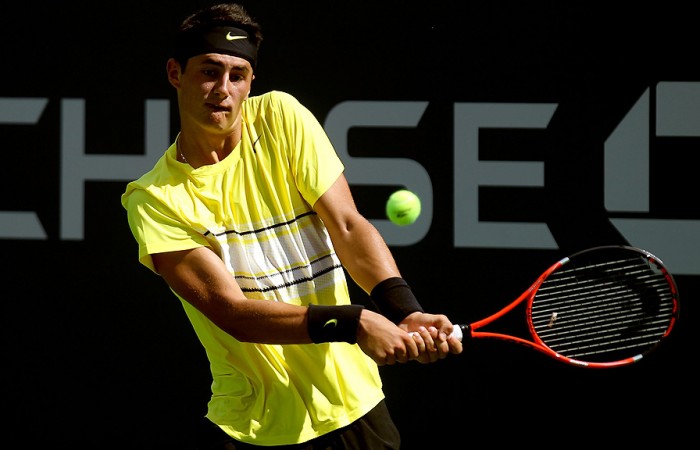 Bernard Tomic is one win away from a mouth-watering potential third round showdown with Roger Federer at this year’s US Open.

The Australian made short work of American qualifier Michael Yani in the opening round on Monday, winning 6-3 6-4 6-4 in one hour and 50 minutes at Flushing Meadows.

Despite being the youngest player in the men’s field and making his US Open debut, Tomic showed few nerves in accounting for the world No.208 on court 11 in warm, sunny conditions.

Tomic is aiming to turn the tables on Cilic after losing a memorable five-set match to him in the second round of last year’s Australian Open.

Federer is due to face Santiago Giraldo of Colombia later on Monday in his first round match, and if the early rounds go as expected for the No.3 seed he’s on track to face Tomic, should the Australian topple Cilic.

After reaching the Wimbledon quarter-finals, Tomic’s game went off the boil during the north American hardcourt season.

The world No.62 only notched up one win from three tournaments but said his focus had been on the final grand slam of the year.

“You want to play well at the grand slams,” he said.

“You still want to do good at the others, but if you can perform really good in the slams, that’s what your main and my main focus is.

“I think I’ve prepared well for this.

“It’s my first round, and I can go into the second round feeling confident against Marin.”

The US Open started on time in the Big Apple on Monday despite the weekend’s wild weather associated with Hurricane Irene.

After Tomic took the first set, there was some controversy late in the second set with Tomic serving at 40-30 and trailing 3-4.

Tomic’s shot was called out but the chair umpire over-ruled the decision and the Australian was awarded the game.

Yani was not happy with the call and the locals voiced their frustration by heckling the umpire for the next few points of the match.

Tomic smiled as the boos rung out across the court before advancing to the second round.

Fellow Australians Samantha Stosur and Anastasia Rodionova were due in opening round action later on Monday.