Bernard Tomic did his best to hide his true feelings. 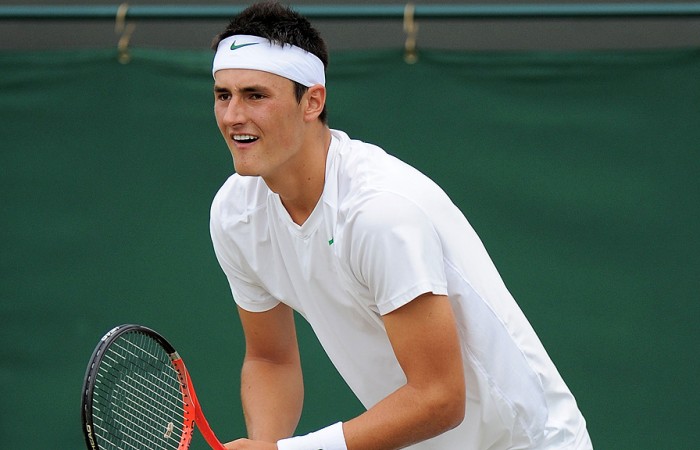 Bernard Tomic did his best to hide his true feelings.

However, he couldn’t stop a big smile sweeping across his face at the possibility of a third-round US Open encounter with five-time champion Roger Federer.

But with light rain falling on him outside Arthur Ashe Stadium as Hurricane Irene approached New York, the 18 year old said his focus was on Monday’s (Tuesday AM AEST) opening round match against American journeyman Michael Yani.

Considering Tomic’s record of one win from four matches during the north American hardcourt season, the Wimbledon quarterfinalist was right to show respect to world No.208 Yani.

However, it was the prospect of playing Swiss ace Federer for the first time that lit up the teenager’s face.

“It would be great to play against him, to get that far, and especially before the Davis Cup tie against Switzerland [in Sydney next month],” Tomic said.

“To have a shot and find out where I am, he is the best player to have played the game for me until someone else reaches 16 [Grand Slam] wins.

“I have to concentrate on the first two rounds to get there.”

Tomic, in his first main draw appearance at Flushing Meadows, has played Yani three times with the Australian winning their most recent meeting in three sets in the opening round of 2010 Wimbledon qualifying.

The winner of their clash takes on the victor of 27th seed Marin Cilic and American young gun Ryan Harrison in the second round for a likely encounter against the Swiss superstar.

If Tomic does meet Federer, it will cap a stunning year considering he was fighting his way through qualifying for the Sydney International only seven months ago.

It would mean the Queenslander has met the sport’s big three at Grand Slams this year.

He played Rafael Nadal in the Australian Open third round and clashed with Novak Djokovic in the final eight at Wimbledon.

Tomic, ranked 62 in the world, has always had an unshakable belief in his own ability but even he was surprised by his breakthrough performances this year.

“I have to work hard to stay there and then become as good a player as I can before I start to worry about when I will start beating Federer, Djokovic, Nadal and reaching the final and semifinals of these sorts of tournaments.”

The major upside to Tomic is that he is so far from the finished article.

His growth spurt to 193 cm means he still looks ungainly at times on the court as he waits for his body to mature.

Tomic said his camp was still trying to work out what his ideal playing weight was.

“I am always losing kilos, adding kilos so I think I need to find my balance,” he said.

“I have a year ahead of me where I can become as good physically as I can be.”

Compatriot Samantha Stosur also gets her US Open campaign underway on Tuesday (AEST) when the ninth seed takes on world No.56, Sweden’s Sofia Arvidsson.

And fellow Australian Anastasia Rodionova has an opening round clash with Russian Alla Kudryavtseva.