Former world No.1 Ana Ivanovic had a straight-sets win over Japan's Ayumi Morita on Wednesday. 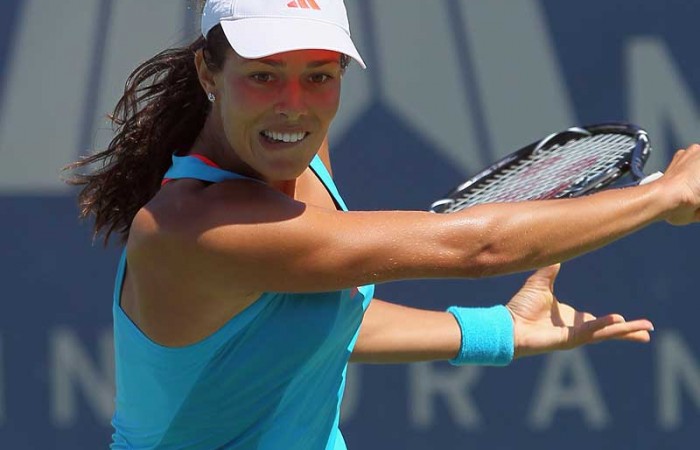 Former world No.1 Ana Ivanovic had a straight-sets win over Japan’s Ayumi Morita on Wednesday in the second round of the WTA San Diego Open, avenging her first-round, straight sets loss last week.

After winning the first set 6-1, fifth-seeded Ivanovic lost the first five games of the second set before rallying to win five consecutive games and then clinching the match in a tiebreaker.

“I think this was a whole different match,” Ivanovic said.

“It was a whole higher level than last week. I can see lots of improvement.”

The number four seed Peng Shuai of China advanced with a 6-1 6-3 win over Australia’s Anastasia Rodionova, while eighth-seeded Daniela Hantuchova of Slovakia had a 6-1 6-3 victory over Barbara Zahlavova Strycova of the Czech Republic.

Rodionova was the only remaining Australian in the draw after compatriots Jelena Dokic and Jarmila Gajdosova both suffered first round losses in the US Open warm-up event.

American teenager Sloane Stephens had an upset 6-3 7-5 win against seventh-seeded Julia Goerges despite a potentially costly and embarrassing mistake in their second-round match.

The 18-year-old Stephens, ranked 131 in the world, won despite squandering a set point when she allowed an out ball to hit her in the back.

“Today wasn’t her best day. I’m happy I got her on this day,” Stephens said. “But everyone has their days and today wasn’t hers. I guess it was mine.”

No.11 seed Maria Kirilenko of Russia withdrew from the tournament on Wednesday with a left hip injury before her second-round match against Romania’s Tamira Paszek. Stephens will face Paszek in the quarter-finals.

The win allowed her to laugh at the set point she gave away when her German opponent hit a ball long, but Stephens inexplicably allowed the ball to hit her in the back. Goerges called it “the funny point”.

“That was so embarrassing. I don’t know what happened,” Stephens said. “I was watching it. I tried to get out of the way. That’s never really ever happened to me before. It was embarrassing, it was funny, it was childish, something an 18-year-old would do.”

Goerges, who has two wins this season over top-ranked Caroline Wozniacki, is struggling on the hardcourts after losing last week in the first round of the Bank of the West Classic at Stanford.

“If you saw me play last week, it’s not so frustrating,” Goerges said. “It’s been a big improvement. I am trying to play my game and I am going for it the whole match. Obviously, it is not working out right now, but it’s the right way to come back.”