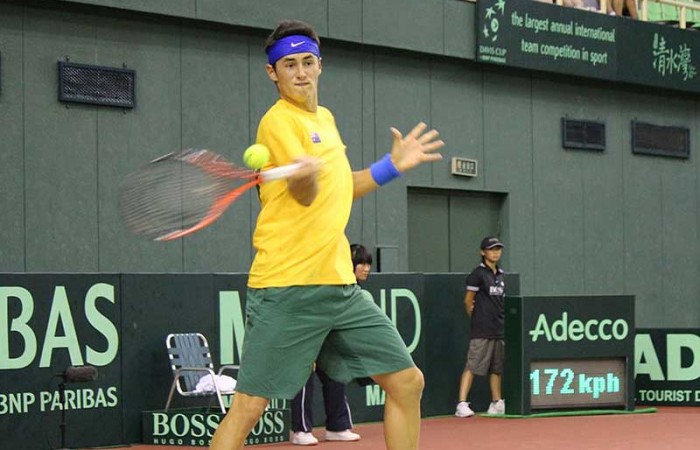 “He played pretty well today, so I am happy that I won it and that it’s one all now,” the 17-year-old said.

The Wimbledon quarterfinalist said he had played much better at the All England Tennis Club, where his sizzling form could only be halted by world No.1 Novak Djokovic.

“Wimbledon was different. I played much better tennis over there than I did obviously today. Today was different too, it was tough to play my game there were different conditions, today was hardcourt Wimbledon was grass…I am happy I won in the end

“We have got to give credit to the Chinese today.”

Earlier today, Marinko Matosevic, playing his first match for Australia, lost a thrilling encounter against teenager Di Wu 4-6 6-3 3-6 6-4 6-4. Matosevic admitted he had found the pressure of Davis Cup quite confronting.

“I was just very nervous out there and I made too many unforced errors,” Matosevic said post-match.

“I think I have just got to learn to cope with the moment better in a high intensity environment like Davis Cup.”

“If I knew it was going to be this tough I wouldn’t have taken the job,” he joked.

“The Chinese players are very disciplined they are very tough and they make you beat them and I am very impressed with the way they went about it, they did a very good job.

“It was a bit tough for Marinko and Bernard was very lucky in the end to get through that match but you have to give a lot of credit to the Chinese boys.”

Tomorrow’s reverse doubles sees  Lleyton Hewitt partnering Chris Guccione against Zhe Li and Mao-Xin Gong.Rafter said it was a possibility that Hewitt could also play in the reverse singles on Sunday. “Sure there’s a possibility he could play singles but we have to wait and see how he goes in the doubles tomorrow first,” said Rafter.

The winner of this tie earns a berth in the World Group Playoff in September.