Ashleigh Barty had every reason to be elated as she accepted the Wimbledon girls' championship trophy. 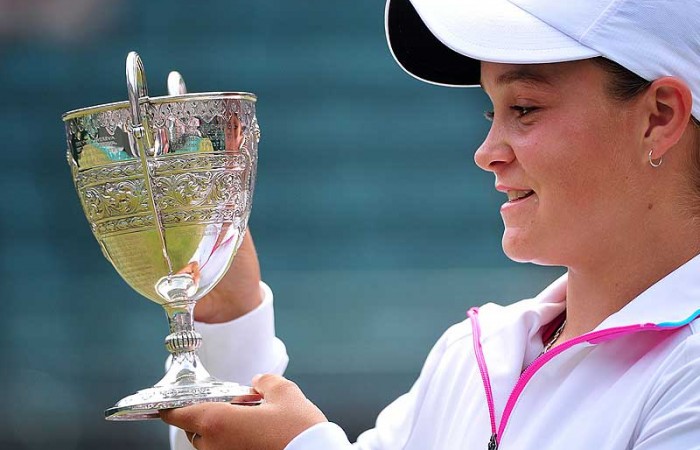 Ashleigh Barty had every reason to be elated as she accepted the Wimbledon girls’ championship trophy after clinching a historic junior title double for Australia.

But it was a post-match text message which seemed to bring the indigenous teenager most joy.

Having beaten third seed Russian Irina Khromacheva 7-5 7-6 (7-3) on Sunday, the unassuming 15-year-old from Ipswich in Queensland was thrilled to receive congratulations from two-time Wimbledon champion and friend Evonne Goolagong-Cawley.

“She sent me a text message after my match saying congratulations. I really like that. We’re close. I’m really pleased to be able to talk to her like that,” Barty said.

“She’s a nice person to talk to.

“She gives me good confidence, and I’m happy to be a part of her life.”

Barty’s win followed South Australian Luke Saville’s victory in the boys’ final on Saturday – the first time Australians have won both titles in the same year.

She’s only the second Australian after Debbie Freeman in 1980 to win the girls’ trophy while five – John Alexander, Pat Cash, Mark Kratzmann, Todd Reid and Saville – have won the boys’ crown.

Down two breaks in the opening set of the final, Barty seemed to turn the tide against the hard-hitting Russian when she dug deep and served successive aces to hold the game before forging on.

“I was never going to give up,” she said.

“It’s the final of junior Wimbledon. I keep trying my guts out for every point.

“I was able to get a few good points in a row and upset her a little bit.”

Having collected her trophy with a simple smile and nod of the head, Barty admitted she doesn’t typically get excited.

“I just try and keep it pretty simple. That’s just my personality really,” she said.

Barty, who started playing tennis aged five because she thought “whacking a ball around a court seemed fun”, was grateful for the support of other Australian players in the crowd.

She had her AIS coach Nicole Pratt and Jason Stoltenberg in her players’ box and Saville watched from the court one stands.

“This morning Jase (Stoltenberg) gave me a bit of a pep talk,” Barty said.

“He was a semi-finalist here. He’s been here, done that. He coached Lleyton Hewitt to world No.1.

“Just to be able to share those experiences with those guys is really special.”

Junior Wimbledon titles far from guarantee future success in the senior ranks. However, there are some notable names on both trophies – Stefan Edberg, Ivan Lendl and Roger Federer for the boys and Tracy Austin, Amelie Mauresmo and Caroline Wozniacki for the girls.

“It has been a really successful tournament for Australian tennis and particularly junior tennis,” Saville said.

“Bernard (Tomic) in the men’s making the quarter-finals and myself and Ash (Barty) in the boys’ and girls’ singles, and don’t forget (Australian teenager) Jason Kubler was also in the semis. It’s been all good.”