Australians have collected both the boys and girls' Wimbledon titles in the same year for the first time. 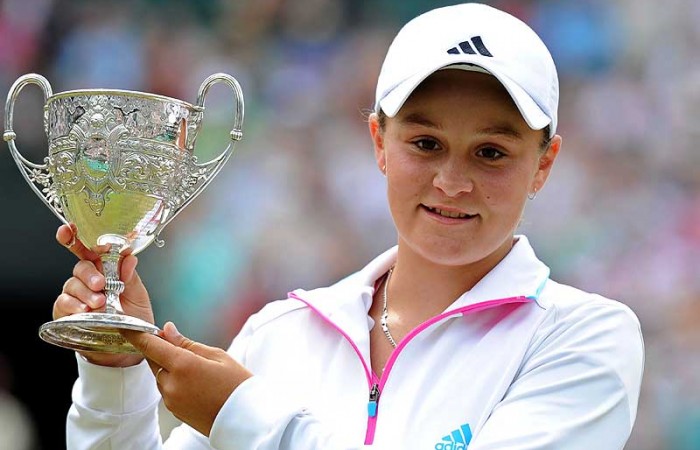 Australians have collected both the boys and girls’ Wimbledon titles.

Ashleigh Barty, 15, completed the double with a 7-5 7-6 (7-3) win over Russian 16-year-old and third seed Irina Khromacheva on Court One on Sunday.

The Queenslander is only the second Australian to win the title after Debbie Freeman’s victory in 1980.

Barty recovered from two breaks down to win the opening set.

At 4-1 up in the second set and in sight of victory, the Russian rallied before Barty held her nerve to win in a tie-break.

It was a clearly thrilled but reserved Barty who accepted the trophy, briefly holding the silverware aloft for photographers before walking the baseline at one end of the court, acknowledging the crowd.

Having watched the entire match, Saville said the result was great for Australian tennis.

“It has been a really successful tournament for Australian tennis and particularly junior tennis,” Saville said as he sat in the crowd of court one.

“Bernard (Tomic) in the men’s making the quarter finals and myself and Ash (Barty) in the boys’ and girls’ singles, and don’t forget (Australian teenager) Jason Kubler was also in the semis. It’s been all good.”
Having enjoyed a quiet dinner with his coaching crew and friends after his Saturday victory, Saville said he would definitely be catching up with Barty to offer his congratulations.

Tennis Australia’s director of Tennis Craig Tiley said: “This is a great effort by Luke and Ash. Playing in a Junior Grand Slam final is a significant accomplishment and both should be very proud of their success. These younger players continue to make us excited about the future of Australian tennis. Congratulations to these players and our caoching staff on a very successful Wimbledon championships.”