Luke Saville has bolstered the growing belief in Australia's next batch of men's players. 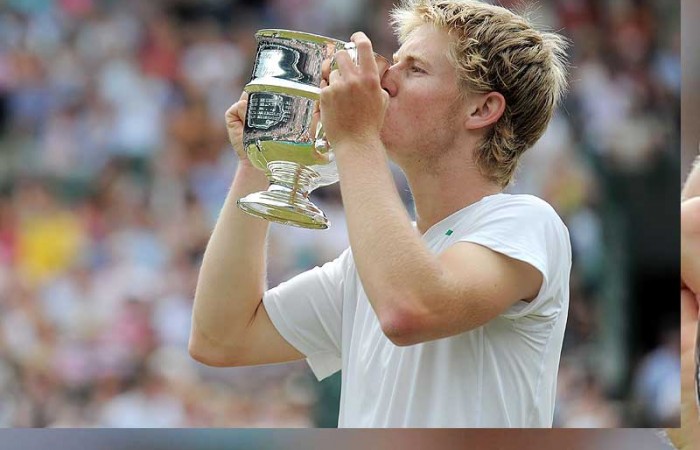 Luke Saville bolstered the growing belief in Australia’s next batch of men’s players by capturing the Wimbledon boys’ title with a stirring performance.

The 17-year-old from country South Australia produced a comeback worthy of his idol Lleyton Hewitt to defeat Britain’s Liam Broady 2-6 6-4 6-2 on a packed court 1.

It was a sweet success for Saville, having lost this year’s Australian Open junior final and reached the semi-finals of the French Open tournament.

Saville has said that Bernard Tomic’s charge to the quarter-finals at the All England Club had boosted the confidence of his Australian peers.

He felt his performance on Saturday showed he was on track to make an impact on the men’s tour in the coming years.

“I feel like at the Australian (Open) and now here, that I am starting to play some unbelievable tennis again,” Saville said.

“I feel if I can stay injury-free and play enough futures events and maybe challengers that my ranking will take care of itself as I am playing some great tennis.

“I believe I can be a top ten player one day.”

There is more than a touch of Hewitt in Saville.

The fellow South Australian not only has blond locks but wears his cap backwards like the former world No.1.

And Saville needed to show some of Hewitt’s trademark fight after being a set and a break down in the second against rampant left-hander Broady.

But in sight of becoming Britain’s first winner of the title since 1962, the left-hander started to crumble.

Saville won 11 points in a row and never let him back in the contest.

“It is a huge feeling looking at the past champions,” Saville said.

“One of my best mates (and fellow Australian) Ben Mitchell made the final last year and his advice was to go one further than him.

“I did that and he is pretty happy.”

Saville hoped that Hewitt could continue playing and pass on his advice to the next wave of players.