Five-time champion Venus Williams and 40-year-old Kimiko Date-Krumm reached the Wimbledon second round on Monday, striking a blow for the tour's senior citizens at the 125th Championships before the rain came down. 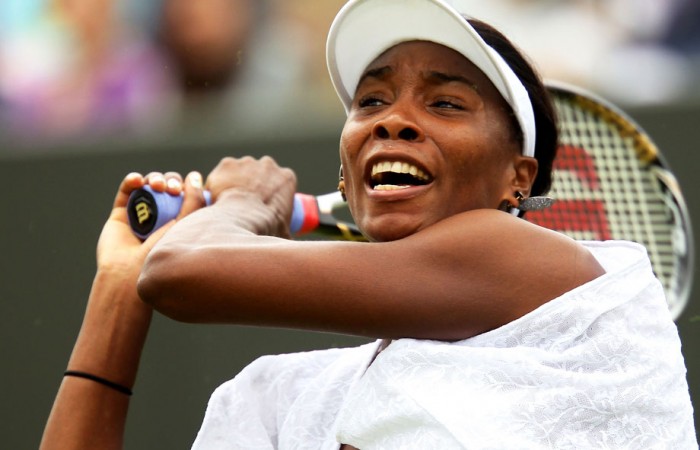 Five-time champion Venus Williams and 40-year-old Kimiko Date-Krumm reached the Wimbledon second round on Monday, striking a blow for the tour’s senior citizens at the 125th Championships before the rain came down.

Williams, 31, was untroubled in disposing of Uzbekistan’s Akgul Amanmuradova 6-3 6-1, showing no signs of the hip injury that kept her off the tour for five months until her Eastbourne return last week.

The American, whose choice of a loose-fitting, zipped-up, baggy outfit caused as much conversation as her free-flowing tennis on Court Two, fired 23 winners past the Uzbek.

“Coming into any major there is a bit of tension and because I haven’t played a lot I think that adds a little pressure on me,” Venus said.

“But it’s always great to be back. I think playing a few matches at Eastbourne helpd me feel comfortable here.

“I was happy to be playing at all after missing so much of the year. That was a big plus for me today.”

Williams now takes on Date-Krumm who became the second oldest winner of a singles match at Wimbledon with her 6-0 7-5 demolition of British wildcard Katie O’Brien.

Date-Krumm, a semifinalist at the All England Club in 1996 having made her debut in 1989, had the honour of playing the first match on the new Court Three, which has replaced the old Court Two, the former Graveyard of the Champions.

“I remember 1996 on the Centre Court. I played against Steffi Graf and it was in darkness,” recalled the Japanese of the year she last won a Wimbledon match.

“We played over two days. It was a big memory for me. Then after 15 years I win in the first round and it’s already a miracle.”

Zvonareva’s last match at the All England Club 12 months ago ended painfully as she lost in straight sets against Serena Williams in her first Grand Slam final appearance.

The 26-year-old, who was also beaten by Kim Clijsters in the US Open final, was pushed hard by world number 118 Riske, but eventually prevailed to set up a second-round match against compatriot Elena Vesnina.

“She played some good tennis but I tried to stay focused. I had some ups and downs but I’m really happy I was able to pull it off in the end,” Zvonareva said.

“I lost my concentration for a bit but I always fight for every point and I was able to pick it up in the third set.”

But there were three seeded casualties with Estonia’s Kaia Kanepi, Israel’s Shahar Peer and Ekaterina Makarova of Russia all going out.

Australian number three Dokic, who reached the semifinals here in 2000, is rebuilding her troubled career and had the world number seven reeling in the second set before a rain break interrupted her flow.

Schiavone came back to win 6-4 1-6 6-3 under the Centre Court roof ,which motored into action once heavy rain washed away over half the women’s program in the early evening.