Jelena Dokic continued her fine run up to Wimbledon, making the semi-finals of the joint WTA/ATP grasscourt event in the Netherlands on Thursday. 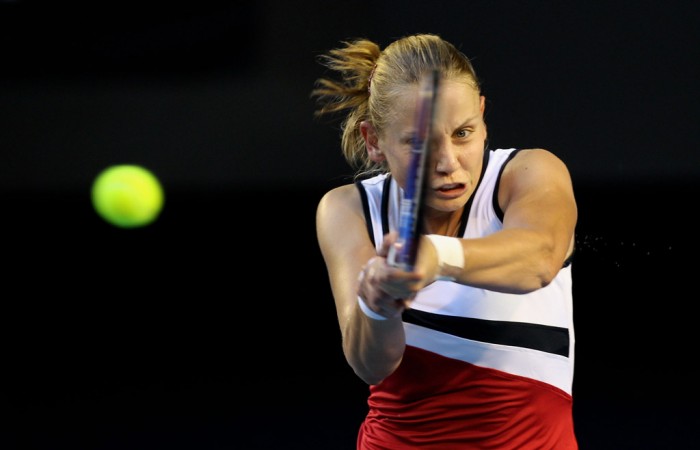 Jelena Dokic continued her fine run up to Wimbledon, making the semi-finals of the joint WTA/ATP grasscourt event in the Netherlands on Thursday.

The unseeded Australian earned a Friday semi-final against seventh-seeded italaina Roberta Vinci who beat No.3 Yanina Wickmayer of Belgium 6-4 6-4 in their quarter-final.

Showers throughout the day forced the postponement of several quarter-final matches and others were abandoned and will be completed Friday.

The seventh-seeded Vinci capitalised on an error-strewn performance by Wickmayer to break the Belgian’s serve once in the first set and three times in the second.

The start of the match was delayed by persistent rain and play was briefly interrupted by another shower with Vinci leading 3-2 in the second set.

In matches that were completed Romina Oprandi, who ousted Kim Clijsters in the second round, beat Kimiko Date-Krumm 7-6 (7-3) 6-4 while in the men’s event fourth-seeded Ivan Dodig of Croatia beat Teymuraz Gabashvili 2-6 6-1, 6-2.

Second-seeded Russian Svetlana Kuznetsova will resume her quarter-final against Dominika Cibulkova 0-3 down in the final set after the fifth-seeded Slovak broke her serve twice as rain closed in Thursday evening.

In other unfinished matches, Santiago Giraldo and Dmitry Tursunov’s quarter-final was evenly poised at 3-6 6-4 4-4 and Xavier Malisse was leading Alex Bogomolov Jr. 6-2 4-3.