China's Li Na made sporting history at the French Open on Saturday. 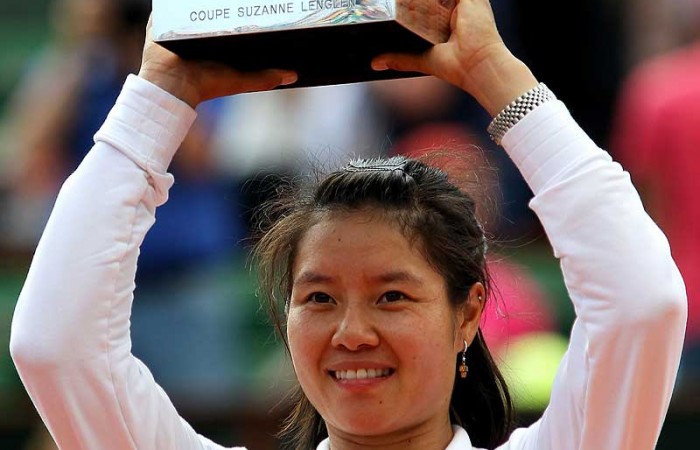 China’s Li Na made sporting history at the French Open on Saturday when she became the first player from Asia to win a Grand Slam singles title.

The 29-year-old from Wuhan defeated defending champion Francesca Schiavone of Italy 6-4 7-6 (7-0) to take her place in the pantheon of Chinese sports stars.

Li clinched the watershed win with a superb 7-0 tie-break performance in the second set, falling onto her back in the red dirt when Schiavone hit long on match point.

It was a thrilling display of shot-making from the woman who has said she hopes that by winning a Grand Slam title she will act as a catalyst for the growth of tennis in her giant homeland.

For 30-year-old Schiavone it was a bitter pill to swallow one year after she upset the odds to become Italy’s first and so far only Grand Slam women’s champion.

“I was 4-2 up and she tried to come back, but I just had to stand up again and I made it. I think everyone in China will be so excited,” said Li, who has been a pioneer for the sport in her country throughout her career.

“I was nervous but I didn’t want to show my opponent.”

Schiavone said: “She played well. I couldn’t push her from the baseline. Then we were closer. One has to lose, one has to win. She deserved to win.”

In what was the the oldest Grand Slam singles final in 21 years, the combined ages of the two players was 60 years and 79 days.

Schiavone was looking to her claycourt expertise and experience of winning here last year to make the difference, while Li said that having played and lost a Grand Slam final already this year in Australia would help her confidence.

With the final broadcast live on television in China, where interest in her exploits has spiralled, Li had the first break point of the match on a sultry, still afternoon on the Philippe Chatrier centre court but she clattered a forehand long.

A tense, closely-fought start to the final pitted the wiry Schiavone’s vicious top spin and tactical guile against the more powerful flat-hitting of the athletic Li and it was the Chinese seventh seed who drew first blood in the fifth game.

A poorly executed drop shot from Schiavone gave Li two break points and she took the second of these when an under-pressure Schiavone hit a forehand wide.

Li then held serve three consecutive times to take the first set 6-4 in 39 minutes and she looked in total charge of the final going into the second set.

She earned three more break points as Schiavone struggled to contain her weight of shot and the Chinese player let out a shout of triumph as she converted the final one of those.

Schiavone badly needed to find an answer to her opponent’s domination and by throwing in some more variety in the next game she crafted her first break point of the final in the next game.

Li though swatted that aside with a big first serve and then confidently moved out into a 2-0 lead.

Another netted drop shot gave Li a further break point in the fifth game, but with the court wide open the sixth seed blasted a shoulder-high forehand into the net with a 4-1 lead on offer.

Li was proving steady as a rock on her own serve as she comfortably held for 4-2 and she saw another break point against Schiavone go astray in the next game.

The missed opportunities immediately came back to haunt her as she flung in three unforced errors when serving for a 5-3 lead and Schiavone pounced to secure her first service break of the match.

Both players then held serve twice to force the tie-break.

Li dominated that from the start, sweeping it 7-0, to gleefully write her name into the record books and open what could be a new era for the sport of tennis in China.