Nadal closes in on Borg’s record 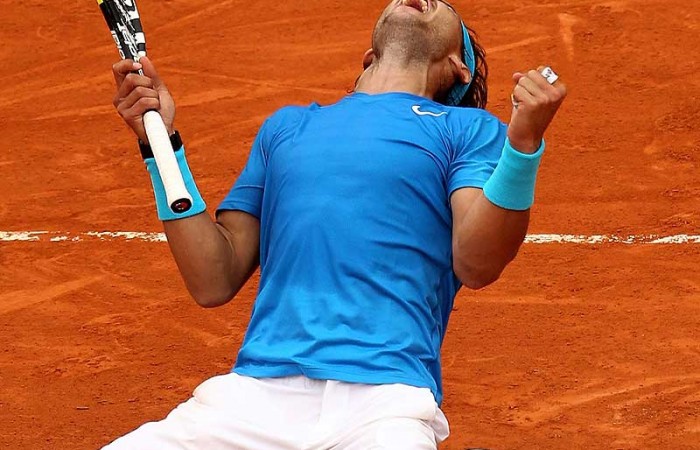 Rafael Nadal moved to within one win of equalling Bjorn Borg’s record of six French Open titles with a hard-fought yet convincing 6-4 7-5 6-4 semi-final win over a battling Andy Murray on Friday.

It was a perfect way to celebrate his 25th birthday for the Spaniard, but he was made to scrap hard by the Scot who shrugged off the effects of an ankle injury to produce his best ever performance on clay.

For Murray, seeded four, his feisty performance was a fitting way to end a brave campaign that saw him battle through illness, a twisted ankle and a broken tooth as he continued his quest for a first Grand Slam title.

His only regret could be only converting three of the 18 break points he had on the Nadal serve.

“Andy is a fantastic player. He deserves to win a Grand Slam very soon,” said Nadal.

“I saved a lot of break points at important moments. The conditions were not easy with the wind changing a lot.

Nadal went into the match as a strong favourite having taken his record at Roland Garros to 43-1 with an impressive straight sets quarter-final victory over Robin Soderling, the only man to have beaten him here.

Murray was playing his first French Open semi-final in his fifth campaign in Paris and he had lingering doubts over the right ankle he turned in his third round defeat of Michael Berrer.

The first four games were closely fought and took 28 minutes to complete but by the end of them Nadal had taken a 3-1 lead after Murray failed to convert the three break points he had.

More worrying still for the Scot was that he twice winced in pain when turning and twisting on his right ankle and was clearly not fully fit.

Nadal turned the screw to take a 5-1 lead but played an uncustomary sloppy game when serving for the set as Murray got back one of the service breaks.

He had to save two break points two games later, but dug deep to take the opening set 6-4 in 62 minutes, leaving the Herculean task facing Murray looking even tougher.

Still it was Murray who was mostly dominating the rallies going into the second set as he dragged Nadal about from side to side with his angled drives from the baseline.

But the Spaniard typically flung up his peerless defences and it was Murray who ceded serve first with an error-strewn fifth game.

A Nadal double fault gave Murray the break back to level at 3-3, and he rattled the Spaniard further in the following game before double-faulting himself on game point to allow Nadal to break again.

Murray made it four breaks in a row to level at 4-4, but despite some heroic resistance against a rampaging Nadal, he dropped serve again in the 11th game and Nadal served out for a two sets lead.

That seemed to break Murray’s spirit and after dropping his serve to open the third set there was no way back for him as Nadal stormed through to his sixth final in seven years at Roland Garros.