Defending champion Francesca Schiavone shattered Marion Bartoli's hopes of becoming just the second Frenchwoman in the Open era to reach the Roland Garros final on Thursday with a 6-3 6-3 semifinal win. 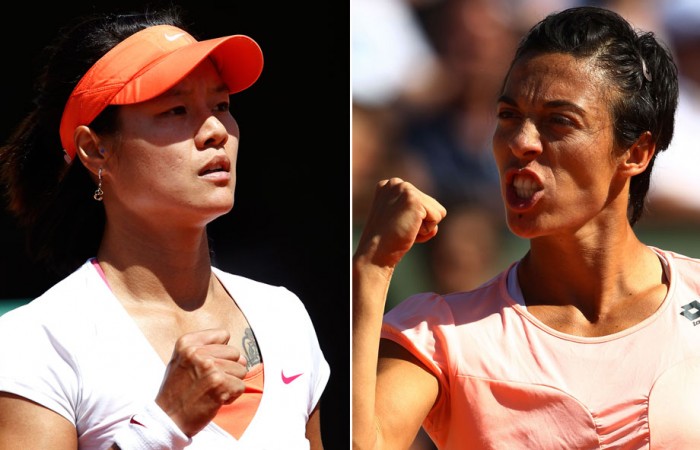 Defending champion Francesca Schiavone shattered Marion Bartoli’s hopes of becoming just the second Frenchwoman in the Open era to reach the Roland Garros final on Thursday with a 6-3 6-3 semifinal win.

Victory will make Schiavone the first player aged 30 or over to win a Grand Slam title since Martina Navratilova’s 1990 Wimbledon triumph.

“I hope my experience from the final last year will help. It’s a dream come true to reach another final,” said Schiavone.

“But Li has had an amazing year. She was in the Australian Open when she lost to Kim [Clijsters]. It will be tough. She is a great player and a great person, but someone has to win.”

She followed it up with another deep forehand that left the Frenchwoman scurrying to recover her ground.

With the break secured, Schiavone claimed the set when Bartoli went long with a backhand.

It was just reward for the Italian whose positive approach in difficult windy conditions saw her hit three times as many winners as her opponent.

The 26-year-old Frenchwoman, a Wimbledon runner-up in 2007, broke to lead 2-0 in the second set but with a game point to lead 3-0, she was handed a warning for a time violation.

The sanction had an immediate effect with Schiavone, who went into the semifinal with a 4-1 career record over Bartoli, clawing back the break when Bartoli clumsily hit long.

Schiavone had the momentum, breaking again in the seventh game for a 4-3 lead courtesy of a running forehand pass.

Bartoli then gave up three match points on her next service game.

But the experienced Schiavone only needed one and she took victory when Bartoli netted tamely.

Sharapova had hoped to become just the 10th woman in the history of the sport to win all four Grand Slam titles, having won one apiece at Wimbledon and the Australian and US Opens.

But 10 double faults, five in each set, proved to be her undoing.

“I never believed I could be in the final of the French Open,” said Li, better known for her play on hard courts and grass.

“I hope I can do even better on Saturday. Both players are tough.”

Sharapova entered the semifinal on a 10-match winning streak on clay following her victory in Rome and with a professed new-found confidence on the surface on which she has always struggled.

But it was clear early on that of the two players, she was the one most troubled by the gusts of wind that whipped up the red dirt on the Philippe Chatrier centre court on a sunny Paris afternoon.

Regularly waiting for calm conditions before launching into her high ball-tossing service action, the Russian was broken in the second game as the more consistent Li dominated.

Sharapova had two break points of her own in the next game but failed to take them as the 29-year-old Chinese player jumped out to a 4-1 lead.

Some booming groundstrokes from the tall Russian forced a break back to get to 4-3, but three double faults in the next game as the wind played havoc with her serve handed the advantage back to Li.

The seventh seed failed to serve out for the set, but once again had little difficulty breaking Sharapova’s serve to 15 pocketing the first set in 50 minutes.

Sharapova, playing in her second semifinal at Roland Garros after losing to Ana Ivanovic in 2007, saw two break points go amiss at the start of the second set, but a Li double fault on the third put her ahead.

This time Sharapova’s serve did not betray her as she moved out into a 3-1 and then 4-2 lead.

Two games later though her serving woes struck again as she double-faulted on break point to allow Li to level the set score.

Nerves were fraying, but Li staved off a break point to lead 5-4 and then three games later clinched the win with Sharapova once again double-faulting, her 10th, on match point.