Sharapova to meet Li in semis

Russia's Maria Sharapova and Li Na of China both put aside years of struggling on clay courts on Wednesday to set up a tantalising French Open semifinal showdown. 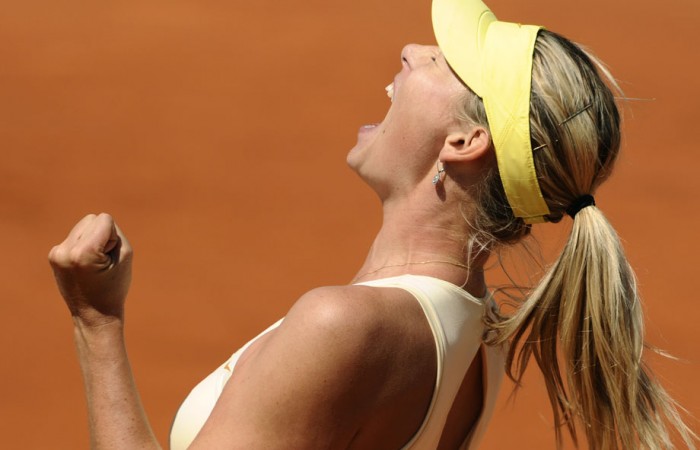 Russia’s Maria Sharapova and Li Na of China both put aside years of struggling on clay courts on Wednesday to set up a tantalising French Open semifinal showdown.

The seventh-seeded Sharapova underlined her new-found confidence on the slippery red dirt at Roland Garros with a 6-0 6-3 thumping of Germany’s Andrea Petkovic.

Li, seeded six, hit back from a break down in each set to defeat Victoria Azarenka of Belarus 7-5 6-2.

Sharapova’s win moved her to within two wins of a career Grand Slam, a feat that only nine women have achieved.

A semifinalist at Roland Garros in 2007, the 24-year-old Russian was in unstoppable form in the first set, breaking in the first, third and fifth games before taking the opener 6-0 with the Russian allowing the German just seven points on her serve.

Petkovic, who had defeated Sharaopova to reach her first Grand Slam quarterfinal in Australia in January, was quickly 0-2 down in the second set before she stopped the rot, finally getting on the scoreboard after 51 minutes.

The 23 year old then levelled at 2-2 with her first break of the match but Sharapova, playing with a rare freedom of movement on a surface that has caused her numerous problems in the past, clawed back the break for a 3-2 lead.

Petkovic then broke for 3-3 after a lengthy sixth game, but former world No.1 Sharapova once again summoned her famed fighting spirit to run off three games in a row.

“It was tougher than the scoreline suggests. There were a lot of games that could have gone either way. I played really smart on the important points,” said Sharapova.

“There is no doubt I have improved on this surface. As the years have gone on I feel I have got better and better.

“I feel physically I have overcome many challenges that maybe a few years ago would have been tough for me.”

The 29-year-old Li became the first Chinese player to reach a French Open semifinal with her accomplished win over fourth seed Azarenka.

She now stands just one match away from a second straight Grand Slam final, having lost to Kim Clijsters in the Australian Open championship match at the start of the year.

On that occasion she was the first Chinese player to have reached the final of a Grand Slam event.

Azarenka, the highest-ranking and, at 21, the youngest player left in the tournament, procured the first break of the match in the third game, but she gave that back immediately with a poor service game that ended in a double fault.

Li, who converted to tennis as a nine-year-old after an early grounding in badminton, saved two break points in a marathon seventh game before finally taking a 4-3 lead.

The Belarusian was being made to work hard by her Chinese opponent who varied her shots to great effect in order to pull Azarenka away from the baseline where she was able to dominate with her heavier hitting.

Those tactics worked a treat in the 12th game when she twice wrong-footed the fourth-seed to get to 0-40 and then clinched the set with a rasping backhand crosscourt drive.

The second set opened in identical fashion to the first with Azarenka breaking in the third game to take a 2-1 lead only for Li to hit back immediately with a break of her own.

The Chinese player was clearly the quicker about the court of the two players and it was footwork again that let down Azarenka in the sixth game with two unforced errors setting up a break point which Li took with a forehand passing shot down the line.

From there, Azarenka’s confidence fell away and Li had little difficulty in finishing her off.

“After I won the match I was feeling, ‘Wow, I can play semi in Roland Garros’. I never think about that before,” Li said.

“So many people think I’m not so good on a clay court, but I think now they should change a little bit.”