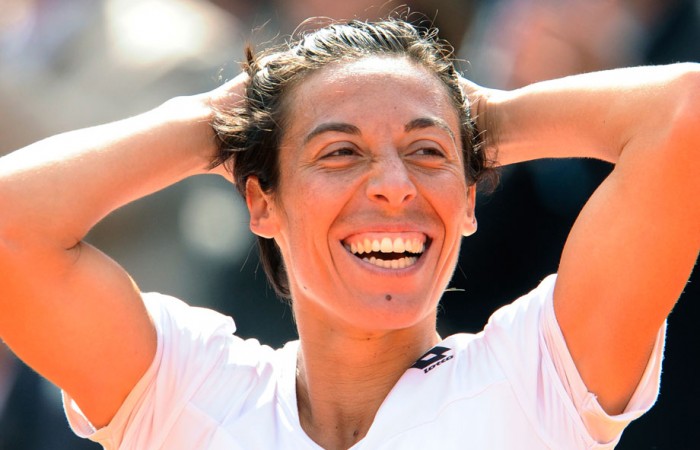 Schiavone, the 30-year-old Italian, battled from a set and 4-1 down to defeat Russian teenager Anastasia Pavlyuchenkova.

Bartoli became the first French player since Mary Pierce in 2005 to make the semifinals thanks to a 7-6(4) 6-4 win over Russia’s 2009 champion Svetlana Kuznetsova.

Schiavone, the first Italian woman to win a Grand Slam title when she won last year, clinched a 1-6 7-5 7-5 win over 19-year-old Pavlyuchenkova in a sloppy quarterfinal that featured 13 service breaks and 79 unforced errors.

Despite being 11 years older than the Russian, fifth-seeded Schiavone said her experience had paid off in a tense finale.

“Then she went a little bit down, and when I caught her, I say, ‘Keep going. I am here. If I have to lose, I have to lose in the right way.'”

Pavyluchenkova, playing in her first Grand Slam quarterfinal, said she had paid for not applying the killer blow when she was ahead in the second set.

“I lost my concentration at 4-1 in the second. I was dictating the game but then I wasn’t aggressive enough, and I just didn’t serve well,” she said.

“She was putting a lot of balls in. It was really tough for me to attack them because they were high. I didn’t feel power anymore. She had courage, and it was tough to stop her.”

Schiavone struggled in the chilly, blustery conditions on Court Philippe Chatrier in the first set.

She was broken twice on her way to a 4-0 deficit in the opener before Pavlyuchenkova, the 2006 world junior champion, clinched a third break in the key seventh game to take the set 6-1.

After levelling the tie, the Italian went to 5-1 in the decider before Pavlyuchenkova battled back for 5-5.

But the teenager lazily handed the initiative back to Schiavone in the 11th game.

A deft drop shot took the Italian to a third match point, however, and she celebrated victory when Pavlyuchenkova batted back a tame backhand that was eagerly gobbled up by the champion.

Over on Court Suzanne Lenglen, 26-year-old Bartoli and Kuznetsova fought out an untidy first set, which featured seven breaks of serve in 13 games.

The Frenchwoman, a Wimbledon runner-up in 2007, was a break ahead in the opening game of the second set and backed it up with another break to lead 5-2.

But the experienced Russian clawed a break back in the eighth game as Bartoli served for the match.

Kuznetsova held for 4-5 but Bartoli claimed victory on her first match point when Kuznetova ballooned a forehand into the stands.

“Thanks to the fans and to my father [Walter, her coach]. We won it together,” said Bartoli.

“I prepared well for this match with my dad. I am very happy and proud.”