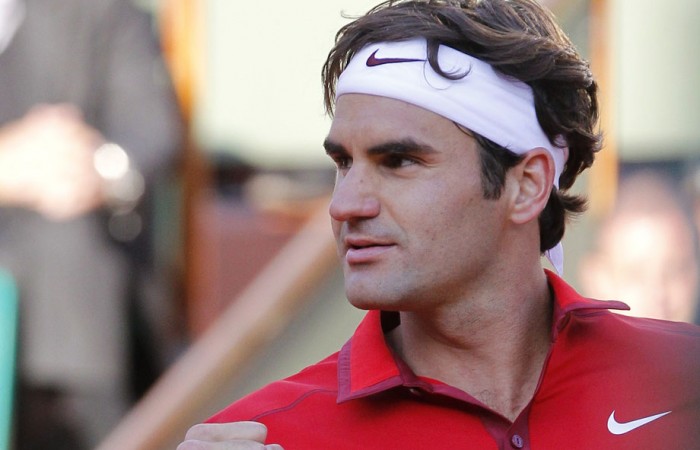 Federer, the 2009 champion, is still to drop a set at this year’s tournament, but in Djokovic he faces an opponent who is just one win short of John McEnroe’s 1984 record of 42 matches unbeaten at the start of a season.

Second-seeded Djokovic will also take over from defending champion Rafael Nadal as world number one if he prevails against Federer on Friday, having beaten the great Swiss in their past three encounters.

“I’m very happy to be in the semifinals,” said Federer, after beating ninth seed Monfils 6-4 6-3 7-6(3) in a scrappy, wind-affected match that featured an astonishing 95 unforced errors from both players.

“Playing a semifinal here at Roland Garros is a great moment and playing such a great player is what we train for.”

Federer, the third seed, made an uncertain start amid windy, overcast conditions on Court Philippe Chatrier and was broken to love in his second service game.

The Swiss broke back immediately, however, thanks to a perfectly judged backhand drop shot that bit and died in the dust, before obliging Monfils to fight off three break points in the eighth game.

Seeded outside the top two at a Grand Slam for the first time since Wimbledon in 2003, Federer brought up two set points on Monfils’s serve shortly afterwards and then clinched the first set when the world number nine put a forehand wide.

Following an exchange of breaks in the second set, Federer broke for a 4-2 lead when Monfils double faulted, prompting the Frenchman to fling his racquet to the ground in disgust.

Both men were culpable of some dismal shot-making, but it did not prevent Federer from closing out the set when a stretching Monfils sent a backhand long.

Monfils saved three break points at 4-4 in the third set and two at 5-5, but swiftly fell 6-1 down in the ensuing tiebreak and was finally beaten when Federer thrashed a forehand winner down the line.

“My big weakness today was that I wasn’t able to serve at all,” Monfils said.

“If I’d had more of a serve, I would not have been handicapped. The wind made things really difficult.”

Nursing a right ankle injury that had threatened his participation in the tournament, Murray had had to fight back from two sets and a break down to level the match before play was suspended amid fading light on Monday.

Troicki took control of the deciding set on Tuesday, opening up a 5-2 lead despite a bizarre incident that saw a ball boy mistakenly run onto the court just as the Serbian was dispatching an overhead smash past his opponent.

The world No.15 was within two points of the last eight at 5-3 and 30-0 up on his serve, but Murray demonstrated extraordinary powers of recovery to storm back and complete a remarkable turnaround in just under four hours.

“I was really nervous,” admitted Murray, who sustained a sprained ankle and a partially torn tendon in his third-round win over Germany’s Michael Berrer.

“It was very windy on court and I was getting so tired in my legs, so out of breath, that I wasn’t even hitting the ball hard.

“Both of us were just hitting the ball up and down the middle. I think it was nerves. But once I went behind I loosened up again and got through it.

“Emotionally it was pretty challenging.”

Murray will meet unseeded Argentine Juan Ignacio Chela in Wednesday’s quarterfinals, when both men will be bidding to reach the last four for the first time on the Paris clay.