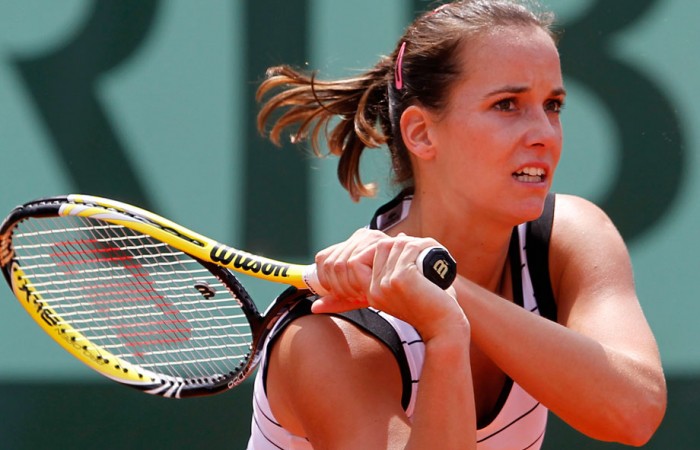 Gajdosova’s third-round defeat in just under two hours on court one left the nation without a representative at Roland Garros for the second week of the tournament.

A poor serving display proved costly for Gadjosova against the in-form world No.12 on the court known as The Bullring.

Petkovic celebrated her win with a moonwalk after stopping Gajdosova from matching last year’s performance of reaching the final 16.

On a warm afternoon in Paris, both players struggled to hold serve looking into the sun from the northern end of the court – to be torn down under the new plans for Roland Garros.

Australian Open quarterfinalist Petkovic entered the match as favourite, having won their past two encounters and collected the WTA title in Strasbourg last week.

The German grabbed a break in the fifth game and managed to scramble well on her own serve, saving three break points during the set to the frustration of Gajdosova, who twice swiped her racquet in anger.

Down 5-2, Australia’s 25th seed started to spray her her first serve and Petkovic wrapped up the first set in 37 minutes.

In a telling statistic for the first set, Petkovic landed 74 per cent of her first serves to Gajdosova’s 42 per cent.

The German continued to pile the pressure on Gajdosova’s serve and the Australian survived four break points in a critical sixth game.

Having ridden out the storm, Gajdosova applied some heat to Petkovic’s serve and broke for the first time in the match before holding for a 5-3 lead.

On her first set point with Petkovic heading the wrong direction, Gajdosova put her forehand into the tape before seizing the second set as a Petkovic shot travelled wide.

They swapped breaks twice in the third set before Gajdosova’s serve unravelled again in the eighth game and the German managed to serve out the contest on her third match point.

Petkovic will play the winner of 25th seed Maria Kirilenko and young Dutchwoman Arantxa Rus, who upset Kim Clijsters in the second round.

Kirilenko and Rus were due to step out on court later on Saturday.

A deflated Gajdosova said her serve had let her down.

“I lost a bit rhythm and then when you are trying to make the serve and it just gets worse when you try to make things happen,” she said.

“I thought I had enough chances in the first, second and third sets.

“I made enough chances to win the match but unfortunately she played better when she had to.”