Jarmila Gajdosova rode a wave of emotion on the way to overcoming Virginie Razzano 6-3 6-1 in their French Open first round match on centre court on Tuesday. 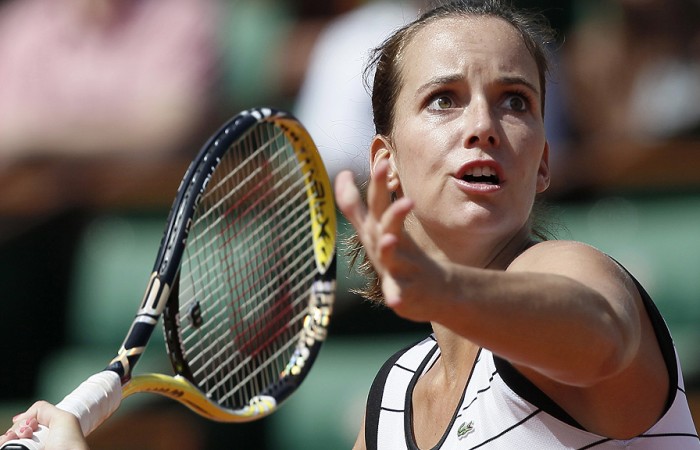 Jarmila Gajdosova rode a wave of emotion on the way to overcoming Virginie Razzano 6-3 6-1 in their French Open first round match on centre court on Tuesday.

It has been an emotional time for both players with Gajdosova splitting from her husband while Razzano’s fiance died a fortnight ago following a long battle with a brain tumour.

Gajdosova was swamped by feelings of sympathy for the Frenchwoman after meeting her at the net after the match.

One Stephane Vidal’s dying wishes was for his partner to play at Roland Garros this year.

“I just told her that I’m sorry for her loss, and what she did was pretty much incredible,” Gajdosova said.

“She stood on the court and held her head up high and tried her best.

Gajdosova said Razzano’s situation had been playing on her mind for the past few days and that it had taken some of the joy away from her win on Philippe Chatrier.

“I mean, it’s only been few days,” the Australian said.

“You don’t know how it’s going to be.

She acknowledged that it put her break-up with fellow Australian tennis player Sam Groth into perspective.

“She’s in a much worse position than I was, but still I felt really bad. It’s very sad news.

“Either way it was going to be a tough match for me to first try and concentrate on what I have to do.

“And second, I was on the other side of a person that was very hurt. You know, it’s not nice.”

Despite all the emotion involved, Gajdosova produced an impressive opening performance in overpowering the world No.96 in one hour and eight minutes.

She will play the winner of Italy’s Corinna Dentoni and qualifier Anabel Medina Garrigues of Spain in the next round.

Gajdosova enjoyed a breakthrough season in 2010, using fourth round appearances at Roland Garros and Wimbledon to propel herself up the rankings.

And on Tuesday’s showing, she looked well on track for a possible third round meeting with 15th seed Andrea Petkovic of Germany and potential fourth round showdown with Kim Clijsters.

“It took me a lot of courage to get on the Philippe Chatrier court today,” Razzano said.

“I had lots of emotions and sighs because it’s difficult for me to be here today.

“But also for me, because what he wanted, he wanted me to play.

“He wanted me to continue to go on with my life, even if in these very painful circumstances, very difficult circumstances.”