Rising Australian tennis star Bernard Tomic has set his sights on cracking the world's top 80 by the end of the year. 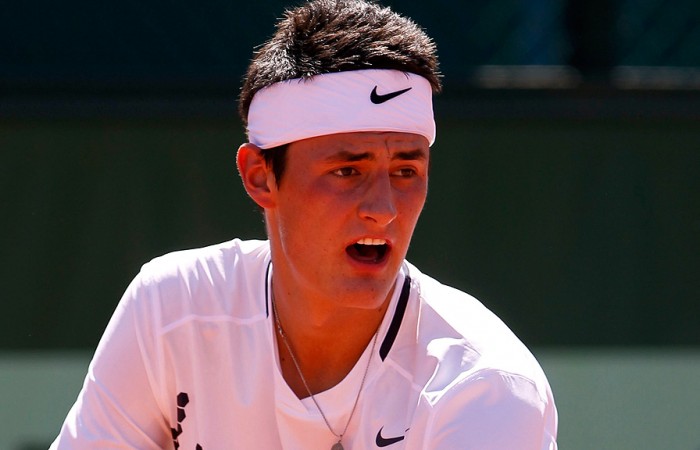 Rising Australian tennis star Bernard Tomic has set his sights on cracking the world’s top 80 by the end of the year.

The ambitious teenager stated the goal following his straight sets defeat in the opening round of the French Open to Argentine Carlos Berlocq on Monday.

The world No.180 was the only Australian in the men’s singles draw.

The Queenslander is still finding his way on clay but believed he was ready to make an impact on grass and hardcourt in the coming months.

“I’ve got not that much to defend [in terms of points], but who knows with tennis.

“If I stay healthy until the end the of year, I’ll play enough tournaments to get me inside the top 80, I think.”

The youngest player on the men’s side showed a lack of nous on the red dirt against seasoned claycourter Carlos Berlocq in warm sunshine on court 10.

In truth, the Argentinian dished out a lesson in his 7-5 6-4 6-2 victory in two hours and seven minutes.

The 28-year-old Berlocq celebrated his victory by pumping both fists and roaring in delight.

It was only the second time in the world No.69’s career that he has progressed beyond the opening round of a grand slam.

Tomic, who lost his serve on seven occasions and produced 46 unforced errors to his opponent’s 23, said he had to become more patient after Berlocq exploited his inexperience on clay.

“I think maybe my strings were a little bit loose, and the balls were flying as opposed to last year and the year before.

“I think the balls make a difference here.

“I think I strung the racquets differently than I should have maybe.

“I think the balls were flying on me early, and I didn’t have enough control like I normally do.

“I think I should have played at least under 20 unforced errors. I did I think about 30 in a set, which is horrible.”

Tomic enjoyed another chance to hit up again with high-flying Novak Djokovic on Sunday and was looking forward to the start of the grass court season.

He heads to Nottingham for a challenger event before the ATP event in Halle and Wimbledon qualifiers.