Naiktha Bains, who led the WJT qualifying team to No.1 spot in Asia Oceania qualifying last week, blogs on her experience overseas. 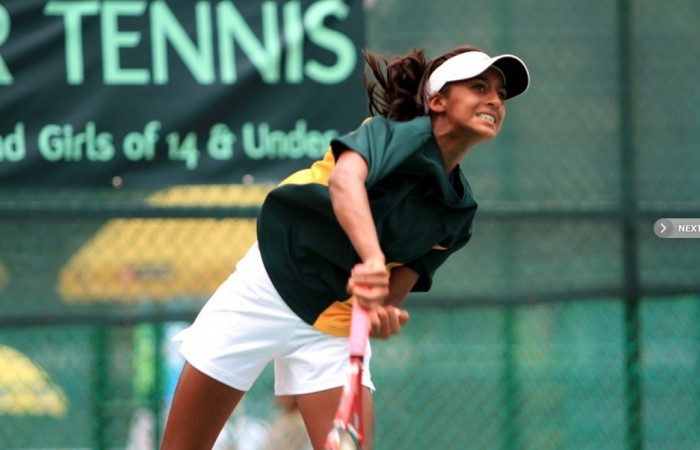 The World Junior Teams Asia/Oceania Qualifying event started for me at Brisbane airport where I met the rest of the crew; Scott Draper, Lizette Cabrera and Anja Dokic. Lizette and Anja had both previously caught flights from home (Townsville and Perth). The plane journey was good for me because I watched a movie and slept most of the way but the others complained of not getting enough sleep! We arrived in Kuala Lumpur where we then stopped over, had some lunch and shortly after caught a connecting flight to Kuching.

When we arrived straight away we took off our tracksuits because it was so humid and sticky!!! We caught a lift to Merdeka Hotel and Suits. Lizette and Anja both loved the hotel as it was so spacious! Unfortunately once again our bags didn’t arrive with the rest of them and we had to wait the whole afternoon in the clothes we wore on the flight! Ewww! Lucky for Lizette she did not because hers were the only ones that came. As we are a team she took one for the team and stayed in her trackies just like us. We then went to watch the boys play one of their pool matches whilst waiting for our bags as we couldn’t hit!

After our bags arrived we quickly got changed and were ready to hit! Finally!!! The first hit was only light, just to get used to the conditions and get back into it. The hit went horribly for all of us! We were literally dying in the heat, sweating heaps and we were all over the place! We took on the challenge though and by the third day we were all hitting well and ready for matches!

The day before the tournament started for girls, and the last day of the Boys, there was a welcome and presentation ceremony for everyone to attend. I was very proud to be leading the Aussie girls out. It was lots of fun and it was a reasonably nice dinner too! The boys finished 5th but unfortunately just missed out on qualifying.

The day after, Scott (Draper) travelled back with the boys and Wayne Arthurs (who was the boys coach) had the pleasure of taking on us girls for another week! (How lucky is he!!!) Wayne was a great coach to have around, he is so funny!!! It was great to have him accompany us as he has played on the tour professionally and knew all the right things to do to provide us with the best chance of winning!

The conditions were so different and were killing us at the start! It was extremely humid, in fact at one stage it reached 100% humidity and 39 degrees! That was something else we needed to get used to but we coped very well in the end! To cool down we made sure we applied some ice on the back of our necks, had ice baths, swam, stayed in the shade and air conditioning and drank plenty of water and energy drinks throughout the day (which Wayne made sure of by buying us two bottles of water to drink at the hotel before dinner!)

Each day we would have a good breakfast at the hotel it wasn’t great but it did the job. Then we would run upstairs grab our bags, race back down and then catch the bus to the courts. Wayne hated us being late (the boys warned us of that) and the first day we were late by one minute and were told to never let that happen again, so from that day onwards we weren’t late once! We really wanted to see Wayne be late so we could get angry at him but that never happened!

During our matches we all supported and cheered each other really well which helped us all especially to get through the tougher ones! We were all in it as a team so it was a big team effort! Wayne was also part of the team therefore he was very supportive and encouraging too. He was better than all the other team coaches! Especially the ones that slept half through a match or even the ones that didn’t talk to the players at all! That was weird!

Australia took one team at a time, one match at a time and before we knew it we had qualified to represent Australia in the World Junior Tennis Competition finals in Czech Republic later on this year. We were so happy and from there we wanted to take it all the way! We celebrated our qualification slightly with a nice dinner and our victory dance after the tie. We didn’t celebrate too much though because it wasn’t over yet. We still had a semi and final to play! Once again we took one rubber at a time and we found ourselves in the final against Korea! We were pumped and so ready to kick some butt!!! Lizette took on the No.2 singles and struggled in the first set but of course it wasn’t over! She fought back to win the next two sets and got Australia ahead one rubber to zero! We were proud of her but then it was my Turn. I started strong and got up one set quickly. She fought back though in the second and made it tough for me to break her. I was trailing most of the second set but finally saved some set points to take it to a tiebreak. I had to make sure I started strong in the tiebreak and get off to a good lead, which I did. Because of this and because she was a set down already the going got too tough for her so finished her off! We were really excited and decided not to play the doubles (so unfortunately Anja missed out on playing on the finals day). We just decided to have the presentation and celebrate properly this time.

On a personal note I was very pleased that I had played all the No.1s from all the countries we faced and didn’t lose a match. Having only conceded one set in the whole tournament I had accomplished what I had set out to do.

After the presentation it was time for our real victory dance in front of everyone! It was hilarious and so much fun! We then went to the jungle to see the orang-utans and crocodiles for a bit of fun, we also squeezed in some shopping and some well deserved treats! GO AUSSIES!

We all flew back to Melbourne the next morning and our wake up time was 3:00 am! We had a pleasant flight as we had managed to get exit seats (thanks to giant Wayne!) which we enjoyed. It was a pleasant flight until our bags didn’t arrive yet again. I had nothing, not even my suitcase! I didn’t have my tennis bag either. Lizette once again got hers straight away (they must love the color pink or something!) Anja was only missing her tennis bag which will be delivered to Perth as soon as possible. All the bags that went missing will hopefully get delivered home soon! I guess one advantage would be that I had no bags to check in or carry the next morning. Lizette, Anja and I then met Francis in Melbourne who looked after us for the one night stay at a Holiday Inn hotel across from the airport. It was a real shock because it was freezing in Melbourne! The next morning we all split up and caught flights to three different places. Sadly that was the end of the journey but we will have lots of memories from this trip!!!

Also, thanks go to Scott Draper and Wayne Arthurs for putting up with us all on this trip!