Novak Djokovic took his unbeaten start to 2011 to 37 matches as he stunned world No.1 Rafael Nadal 6-4 6-4 to win the Rome Masters on Sunday. 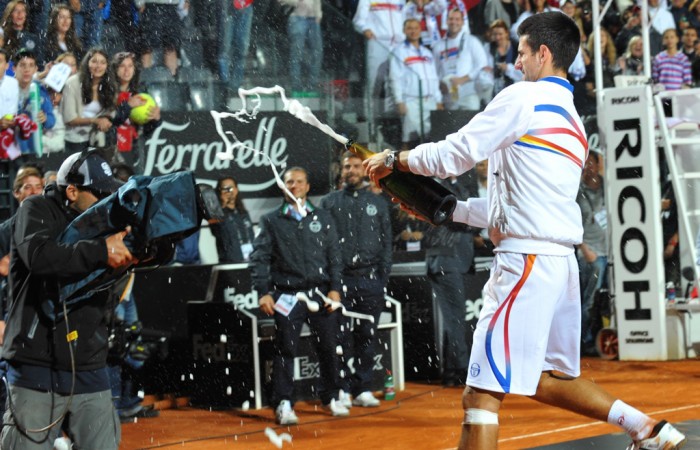 Novak Djokovic took his unbeaten start to 2011 to 37 matches as he stunned world No.1 Rafael Nadal 6-4 6-4 to win the Rome Masters on Sunday.

It was the fourth time in a row the Serbian had beaten Nadal in a Masters final this season and the second successive week he has done so on clay after winning in Madrid.

Djokovic has won all seven tournaments he’s played this year, including the Australian Open, and must surely now be considered the favourite going into the French Open which starts next Sunday.

The world No.2, who lost all of his eight previous matches on clay against the Spaniard before his Madrid triumph, is also homing in on Nadal’s top ranking.

He played some wonderful tennis on Sunday.

At 3-3, 30-15, Djokovic found an impossible angle to hit a forehand winner and secured that game after running Nadal all over the back of the court, the Spaniard netting a backhand on the stretch.

That seemed to galvanise the Serbian and a wild Nadal forehand gave up a double break point in the next game.

Incredibly he then took his eye off a routine backhand and clipped the ball off the rim and into the skies to hand Djokovic a 5-3 lead.

But it is not for nothing that Nadal had already won in Rome a record five times.

After a long crosscourt exchange between Djokovic’s forehand and Nadal’s backhand, the Serbian netted when trying to go down the line and Nadal broke back.

However, a netted backhand from the Spaniard brought up set point in the next game and Djokovic stepped up into the court to swipe away a crosscourt backhand winner.

Djokovic held serve easily at the start of the second before Nadal raced into a 40-0 lead on his serve.

However, that game would go on to last more than 10 minutes and see Nadal broken when he sliced a backhand into the tramlines.

And yet Nadal broke straight back as his fighting qualities came to the fore.

He also fended off a 15-40 deficit in the next game and avoided being broken for the fourth time in a row.

Perhaps more importantly, though, was the fact that Djokovic made four unforced errors in a row.

He also made three straight unforced errors when leading 40-0 in the next game as tiredness seemed to creep up on him, his three-hour epic semi-final against Andy Murray on Saturday starting to show in his legs.

And yet he dug deep to hold serve.

The breaks eased up until Nadal had to serve to stay in the match.

And the last game was a fitting finale to a wonderful encounter.

Nadal twice went long on the backhand to drop to 0-40 but a Djokovic error and some big hitting from the Spaniard brought it back to deuce.

However, Djokovic forced another championship point and this time, after a thrilling rally, he kept his nerve to pounce on a net-cord and fire away the winning shot.

It was only Nadal’s second ever defeat in Rome.