Novak Djokovic maintained his unbeaten start to 2011 with an epic three-hour victory over fourth seed Andy Murray in the Rome Masters semi-finals. 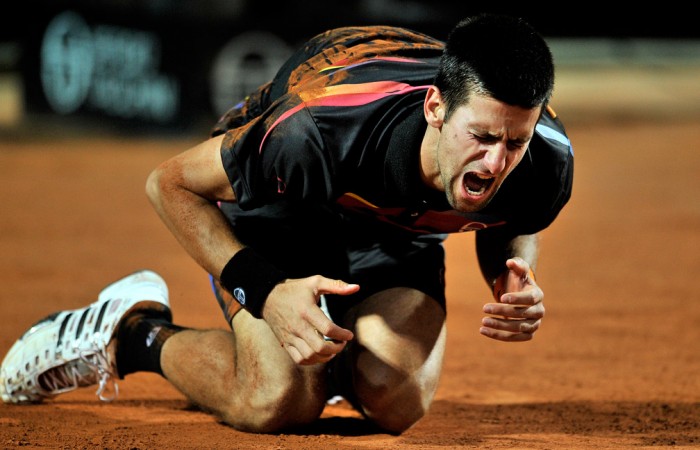 Novak Djokovic maintained his unbeaten start to 2011 with an epic three-hour 6-1 3-6 7-6 (7-2) victory over fourth seed Andy Murray in the Rome Masters semi-finals on Saturday.

The world number two took his run to 36 straight wins this year and will face world number one Rafael Nadal, who beat Richard Gasquet 7-5 6-1, in Sunday’s final in what will be a repeat of last week’s Madrid Masters title match which Djokovic won.

Serbian Djokovic, who turns 24 in a week, ruined Murray’s own 24th birthday celebrations in a stunning match that ebbed and flowed throughout.

But it was Djokovic, struggling with a leg problem, who demonstrated just why he has proved so hard to beat with a never-say-die attitude even when Murray was just two points from victory when serving at 5-4 in the decider.

Just as he had done in the quarter-final against Florian Mayer, Murray started very slowly and the only game he won was when he broke Djokovic in a marathon third game.

In the first set Djokovic had been finding the corners and running Murray ragged around the back court before dropping little slices just over the net and out of his reach.

But in the second Murray found a way to stay in points for longer, to make Djokovic play more shots and errors started to creep into the Serbian’s game.

The sixth game was the crucial one where both players showed signs of nerves but it was Djokovic who cracked, hitting a forehand long on break point.

In the decider Djokovic drew first blood, breaking in the fourth game but that proved only the prelude to five breaks in six games that saw Murray turn the match on its head and lead 5-4 with his serve to come.

Three times Murray was two points from victory but he couldn’t take the extra step and a double fault made it 5-5 and a sixth break in seven.

Finally both held serve and it went to a tie-break where a Murray error handed Djokovic a mini-break and then when the Serbian passed the Scot at the net, he took a 5-1 lead.

There was no way back for Murray and Djokovic sealed victory when the Scot failed to return a drop shot.

Nadal took an 8-0 record against Gasquet into their match and the world No.1 survived some nervous moments in the first set before completing a comprehensive win with a lop-sided second.

It took the Spanish 24-year-old’s record at this tournament to 31 wins and just one loss – in 2008 against Juan-Carlos Ferrero – as he aims for a sixth title in seven years.

Having suffered from a fever earlier in the week, Nadal showed no ill effects against Gadquet.

But having lost three times to Djokovic in Masters finals this year, including last week on the clay in Madrid, he insists he won’t be favourite on Sunday.

“There will probably be less pressure on me than before because I’ll lose the favourite status and be able to play without 100 per cent pressure,” he said.

“I’ll try my best and fight. If someone is better than you then you try to find solutions to find that level.”

Despite how the match finished, Gasquet was far from disappointed with his efforts.

“I was really at a very high level but he hits hard, he served well and I’ve got nothing to reproach myself about.