World No.1 and undisputed clay king Rafael Nadal survived a scare on Wednesday at the Italian Open 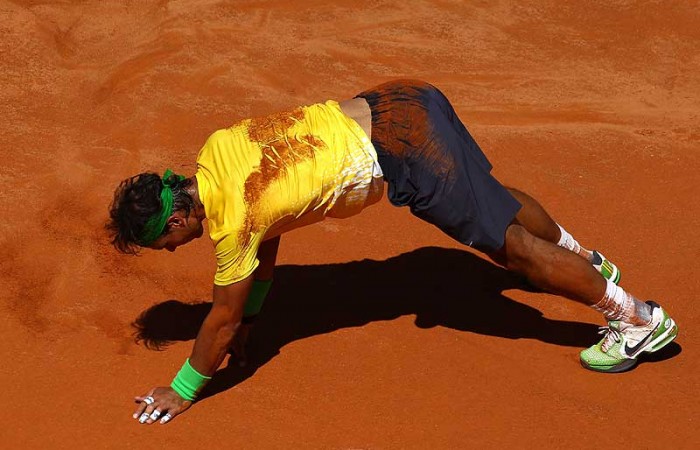 World No.1 and undisputed clay king Rafael Nadal survived a scare on Wednesday at the Italian Open as he overcame a sloppy start to beat Italian qualifier Paolo Lorenzi 6-7 (5-7) 6-4 6-0.

But there were no such difficulties for man of the moment Novak Djokovic who took his winning streak this year to 33 matches with an embarrassingly one-sided 6-0 6-3 destruction of Pole Lukasz Kubot.

World No.3 Roger Federer was also largely untroubled as he saw off Frenchman Jo-Wilfried Tsonga 6-4 6-2.

Following his defeat to Djokovic in the Madrid final last week, the 24-year-old Nadal came close to losing a second successive match on clay for the first time in his career before eventually romping home in the deciding set.

“It’s difficult for me to talk about the match today,” admitted Nadal.

“I played very badly, that’s what I can say.

“I had tough moments in the match where I felt slow, I wasn’t hitting the ball very deep, it was very short all the time.

“He played his match with good serve and volleying, good movement. I played badly but the positive thing is that tomorrow I will play better because it’s not possible to play worse.”

Everything seemed to be going to plan for Nadal when he broke the world number 148 in the sixth game of the opening set but four forehand errors saw him give up a break-back to love.

The first set went to a tie break where Nadal netted a forehand to give Lorenzi a set-point, which he converted when the Spaniard missed with a wild smash.

Nadal was struggling again in the second set when trailing 4-3 but he stepped on the accelerator and reeled off nine games in a row.

Djokovic’s victory edged him closer to American John McEnroe’s 27-year-old record of a 42-match winning start to a season.

Having played, and won, in the previous two weeks in Belgrade and Madrid, Djokovic said he was happy to have got through a match without expending too much energy.

“I played quite well, well enough to win but I was playing an opponent who made a lot of mistakes, especially in the first set,” he said.

“I have to be happy because I spent just one hour on court and that’s important for me to save energy for the next games.”

“He’s a great player, he’s been around for many years, he has great ground strokes and he’s a player who likes to play on clay,” said Djokovic of his next foe.

“We played the final here in 2008 (which Djokovic won) and likes these courts and these conditions, it will definitely be a tough match.”

The world number two has won all six tournaments he has entered this year, including the Australian Open.

Kubot, ranked 141 in the world, came through qualifying to reach this stage of the competition and the gulf in class between the pair was evident.

Federer had a fairly quiet night in the day’s late game breaking Tsonga in the third game before serving out the first set.

And he broke Tsonga again twice at the beginning of the second to set up a fourth round encounter against another Frenchman Richard Gasquet.

In the women’s event, former world No.1 and Roland Garros winner Ana Ivanovic was the most high-profile casualty of the day as she lost 2-6 7-6 (7-4) 6-3 to Belgium’s Yanina Wickmayer.