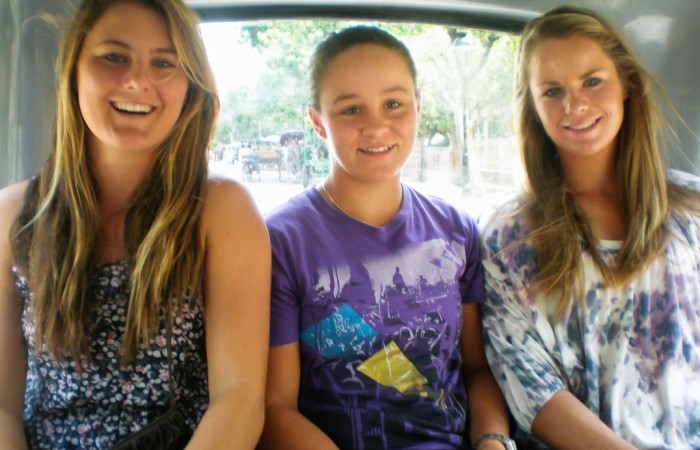 Our tour to India for the Junior Fed Cup (JFC) qualifying had a pretty rofeugh start! Brooke Rischbieth, a member of our team, missed our international flight from Sydney to Singapore! Myself, Belinda Woolcock, our coach Ken Richardson and Ken’s wife all boarded the plane a little worried for our fellow Aussie. Luckily, there was a flight to Singapore only hours later with 1 seat left, and Brooke was able to catch that flight.

We arrived in New Delhi, India at about 11pm and Brooke landed seven hours later. After a hectic day of travel we all had a rejuvenating sleep and were on court the next day! The boys were still battling it out in their qualifying (which they eventually won) but the Australian Girls’ were the first team here practicing for the JFC qualifying which was a great feeling. We know that we are going to be the most prepared coming into the tournament and we will definitely be giving it our all!

Our first day of training (21st April) was pretty light. We hit for an hour and a half but it was extremely tough. Feeling a little jet lagged and playing in 50 degree heat is a little different to what we are used to. The air here is so thick, some mornings it’s hard to see 20m in front of you.  We all struggled a lot during our first session, but as the days go on, we are acclimatising and hitting the ball well!

By the second day of training we were all handling the conditions better and we had an awesome day of practice.  I know that I am starting to really enjoy the conditions here, I think the other girls are to and if we just accept that it is going to be tough, I know that we will have a really good shot here in India.

As a reward for our two days of awesome practice, our coach Ken, suggested that we visit the Taj Mahal. We had to rise at 6am to prepare for a five hour car trip, through all of the horrendous traffic to the Taj Mahal. We came across some amazing sights, not all good, and it certainly made us respect how hard some other countries have to work for everything, and how lucky we are to have such a great place like Australia that we can call home.  The Taj Mahal was an amazing sight and it was an experience like no other.

Our last two days of practice went really well and we are all starting to hit the ball really nicely. Our tournament starts tomorrow, but we are unsure of who we play yet. Ken is going to a captain’s meeting this evening to gather information about the coming week.

Our blogs will keep on coming!  We promise to try our best and fly the Aussie flag high!