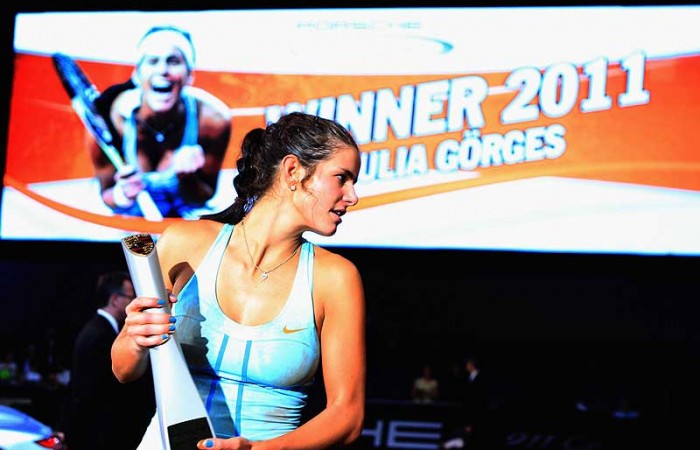 The 22-year-old Goerges collected only her second career title to add to her 2010 Bad Gastein trophy, 17 years after Anke Huber won the second of her Stuttgart crowns in 1994.

“I don’t quite know how I did it,” admitted the German. “Against Caroline, it is always as if you have to climb a high mountain. Now I have done it, I can’t quite believe it.”

Goerges, who sent down 38 winners to Wozniacki’s nine, will now break into the top 30 for the first time in her career.

It was Wozniacki’s second final defeat in 2011 after losing to Russia’s Vera Zvonareva in Doha in February.

The 20-year-old Dane was stunned in her bid for her fourth title of the year, after wins at Dubai, Indian Wells and Charleston, as Goerges grew in confidence as the final wore on.

Goerges was only the third German to reach the Stuttgart final, but she showed no sign of nerves by taking the first set tie-breaker, after building up a 6-2 lead, and then broke Wozniacki in only the second game of the second set.

The Dane failed to cope with Goerges’ strong serve and powerful baseline shots, while the German kept her cool at the crucial stages.

She then served out for a 3-0 lead and never allowed Wozniacki to settle as she kept the world number one under constant pressure, backed by a vocal 4,800-strong crowd who cheered the new champion to her title.

Four reached the quarter-finals and with Andrea Petkovic set now to be ranked 15th, the host nation will have two top 30 players for the first time since 1999.

“It all fitted together just like a jigsaw puzzle for us.”

Stosur lost to Goerges in the semi-finals and is expected to move up to sixth in the world when the WTA rankings are released on Monday.