Update 3:20 pm. World No.30 Jarmila Groth has shrugged off the pressure of opening this weekend's Fed Cup World Group Play-off against Ukraine as Australian No.1. 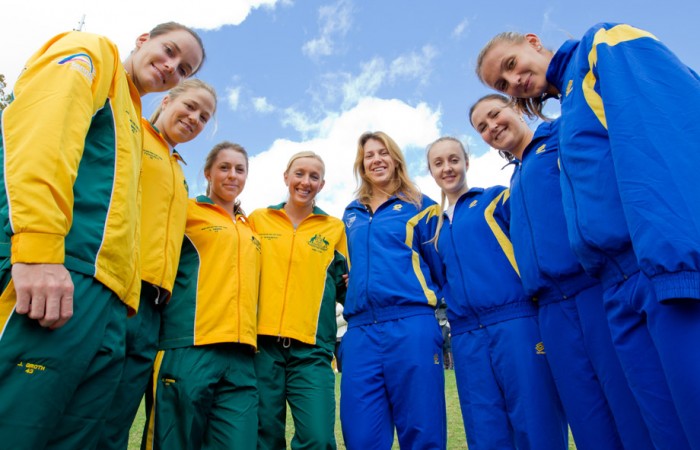 Update 3:20 pm. World No.30 Jarmila Groth has shrugged off the pressure of opening this weekend’s Fed Cup World Group Play-off against Ukraine as Australian No.1.

Groth has been elevated to top spot in the absence of world No.6 Samantha Stosur who withdrew from the competition to concentrate on next month’s French Open.

The Slovakian-born Groth will play Ukraine’s world No.144 Olga Savchuk in the first singles rubber at the suburban Glen Iris tennis centre.

Anastasia Rodionova, ranked 72 in the world, will meet Ukraine No 1 Lesia Tsurenko – the world No. 131 – in the second singles.

The reverse singles and the doubles rubbers will all be played on Sunday.

Australia is under pressure to win to remain in the Fed Cup World Group and Groth said she was keen to get off to a bright start on Saturday.

“Hopefully I can fulfil the position of No.1 and I can help the team win at least one point and hopefully two,” Groth said.

“It’s hard to walk in Sam’s footsteps but I’ll try.”

Groth said she did not feel under any kind of particular scrutiny as the country’s leading player.

“If you’re one or two or three or four it’s still the same effort.

“I’ll just be very happy if I can give them a point.”

Groth was a standout in Australia’s loss earlier this year to Italy when she beat French Open champion Francesca Sciavone while Stosur lost both her singles rubbers.

“It’s great and I beat her but every Fed Cup tie is different,” she said.

“It doesn’t matter who’s on the other side you have to fight for every point you play.

“I will try to concentrate on what I have to do and hopefully it will be good enough to win.”

Coach David Taylor said that even without Stosur and Jelena Dokic, who withdrew citing exhaustion, Australia was a clear favourite to win the tie.

“I think we’re heavy favourites but a lot can happen and we’ve been on the receiving end of upsets and disappointments,” Taylor said.

“But I think we’ve got a great chance to not have a disappointment here.”

Some tickets are still available for the tie, which will be played this weekend at the Glen Iris Recreation Club, Mt Waverley. Tickets can be purchased from Ticketek

Stay up to date with the latest Fed Cup live scores, news, photos and videos this weekend on tennis.com.au or follow us on Twitter @tennisaustralia or find us on Facebook