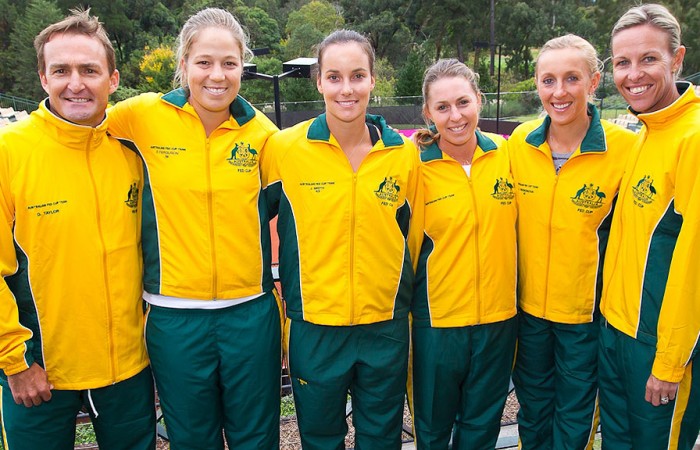 World No.6 Stosur made herself unavailable for this weekend’s world group play-off in Melbourne to concentrate on her preparations for next month’s French Open, where she reached the final last year.

World No.63 Dokic, who won her first WTA tournament in eight years in February but has had mixed results since, pulled out citing exhaustion.

Jarmila Groth, ranked No.30, only made her Australian Fed Cup debut in February but she will lead the local charge, backed by Anastasia Rodionova, Sophie Ferguson and debutante Sally Peers, as Australia fights to avoid relegation from the world group.

Taylor is also the personal coach of Stosur, who has struggled for consistency in a disappointing start to 2011.

He said he’d left the decision on the Fed Cup tie up to her.

“It would be silly for anyone to be critical of Sam not playing,” said Taylor, adding Stosur had barely missed a tie in nine years.

“Every other top player misses ties and now we have other top girls it’s a different situation.

“We hoped she’d get here and she didn’t but we’ve got a strong enough team without her to still win.”

Taylor said many of the Fed Cup sides were struggling to field their best line-ups and said the ITF should look at a change of date or format to improve participation.

The Ukraine are missing their two top-ranked players, Alona (57) and Kateryna (114) Bondarenko with Lesia Tsurenko (131) and Olga Savchuk (144) likely to play singles.

The two countries met last year on clay, also in a world group play-off, in the Ukraine where Australia triumphed 5-0.

This is the first time Australia has hosted a Fed Cup tie on clay – at the suburban Glen Iris Valley club – which fortunately is Groth’s favourite surface.

“It’s a honour to be the No.1 and I’ll try to do my best,” said the Slovakian-born Groth.

“I think we have a great team and I’m pretty happy with my form so I think I or somebody else in the team should win.”