Naiktha Bains and Rhys Johnson have claimed the 2011 Optus 16s Claycourt Championships at the George Alder Tennis Centre in Ipswich on Tuesday. 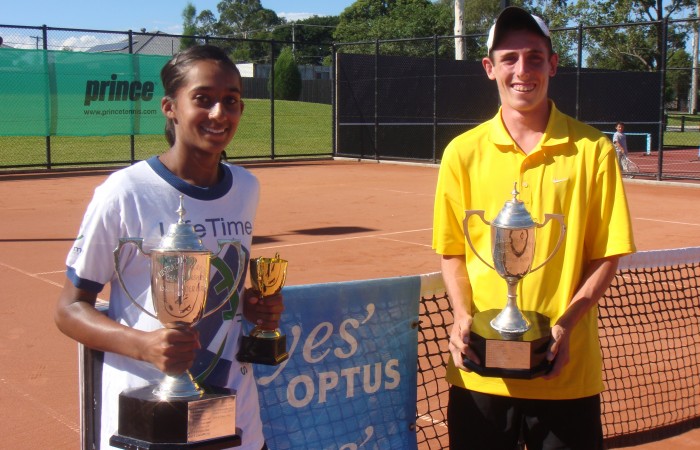 Naiktha Bains and Rhys Johnson have claimed the 2011 Optus 16s Claycourt Championships at the George Alder Tennis Centre in Ipswich on Tuesday.

“My plan today was definitely to stay aggressive, positive and keep doing what I have been doing all week”, said Bains, who won the tournament without dropping a set, despite entering the tournament unseeded.

Entering the match as the underdog, Bains showed no signs of nerves as she jumped to a 5-1 lead in the opening set.

However, that seemed to spring Polak into action, with the 16 year-old getting her game back on track to break back twice and level the set at 5-all.  Despite the small hiccup, Bains held serve to take a 6-5 lead and two crucial double faults by Polak in the following game helped Bains close out the opening set 7-5.

“Molly started hitting to my backhand a lot more, rallying a bit more and being more patient which I found a bit tough,” Bains said.

The second set was an exact replica of the opening set, with Bains jumping out to a 4-1 lead before Polak broke back to level at 4-all.  After taking a 5-4 lead, Bains was able to close out the match on her first match point with a scintillating forehand winner down the line.

“I probably went into the week not thinking I could do this well, I knew I could do reasonably well, but this is great.”

This is Bains’ second national championship this year after winning the Optus 14s National Grasscourt Championships in Mildura in February.

Johnson, who didn’t drop a set all week, comfortably defeated No.4 seed Guccione 6-3 6-2.

Johnson also became the first Western Australian player to win the 16/u national claycourt championship in over 20 years.

Guccione, who just turned 15 in February reached his second consecutive National Junior Championship singles final after reaching the final of the Optus 14s Australian Championships at Melbourne Park in December.