World tennis No.1 Rafael Nadal will square off against Swiss rival Roger Federer in a rare semifinal showdown at the Miami Masters. 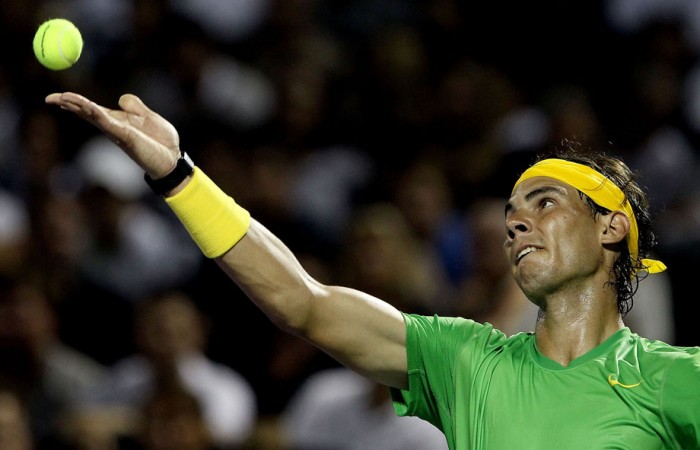 World tennis No.1 Rafael Nadal will square off against Swiss rival Roger Federer in a rare semifinal showdown at the USD$9 million (AUD$8.74 million) Sony Ericsson Open in Miami on Friday.

Spain’s Nadal reached the last four of the combined WTA and ATP tournament on Thursday by beating Czech Tomas Berdych 6-2 3-6 6-3.

Third seed Federer barely broke a sweat as his quarterfinal match was called off after just 10 minutes when Frenchman Gilles Simon couldn’t continue because of a neck injury.

Federer and Nadal, who have 110 career singles titles between them, meet in Friday’s night match on centre court.

“For me, it’s like [a] really special thing when we play each other,” Nadal said.

“Because we play always really important matches. Tomorrow is a semifinal. Very few times we played in semifinals of one tournament.

“The rest of the matches are finals and important for big titles. That makes the rivalry very, very special.”

The two giants have met 20 times since their last meeting in Miami with Nadal winning 13 of those, including a dozen finals. In their 22 career meetings, just three have been in the semis of a tournament.

“I don’t know if rivals in the rest of the history of tennis played a lot of the matches, as many matches as we played,” Nadal said.

“I don’t know how many matches played McEnroe-Borg or Sampras-Agassi, but we played a lot of times. That is what makes the match really special.”

Azarenka next faces former world No.1 Maria Sharapova who rallied for a 3-6 6-0 6-2 victory over German Andrea Petkovic in the other semifinal.

In Saturday’s final, Sharapova will be seeking her first title since May 2010, and her first in Miami.

“It would mean a lot,” she said. “It’s the biggest tournament I think after the Grand Slams. I look forward to going out there and getting it done.”

Azarenka hit one ace and won 72 per cent of her first-serve points in the 76-minute match.