Pat Rafter handed over $1.79 million on behalf of Australia’s tennis community to the Premier’s Disaster Relief Appeal in Queensland. 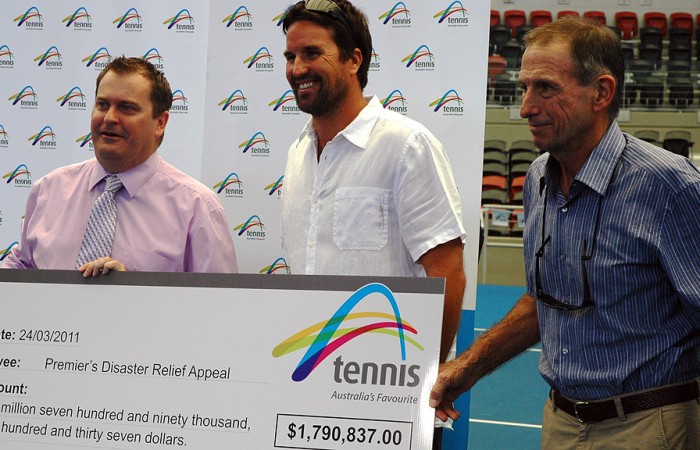 Sport Minister Phil Reeves accepted the cheque on behalf of the Bligh Government, as he toured flood-affected Pat Rafter Arena with its namesake.

Australia’s tennis family, with the help of international tennis stars such as Roger Federer, Lleyton Hewitt and Sam Stosur, raised more than $1.79 million over the summer, including through the Rally for Relief event, held in the lead up to the Australian Open.

Mr Reeves thanked the tennis community, particularly Tennis Australia who organised the event, for supporting Queenslanders during their time of need.

“Australians are renowned for helping out their mates and some of the biggest names in world tennis rallied to support disaster-affected families,” he said.

“It’s hard to believe that just a couple of days after the Brisbane International, there was enough water in Pat Rafter Arena to host a swim meet.

“While damage to the Arena is being repaired, tennis lovers have been able to have a hit on the 16 outside hard courts which reopened on February 7.”

“The Rally for Relief which was put on by Tennis Australia, and supported brilliantly by the players, helped bring more awareness and much needed funds to the people of Queensland,” Mr Rafter said.

“I was honoured to be part of the event and very much embarrassed trying to hit balls against the greats of today.

“Congratulations to all parties involved, and let’s hope the money gets straight off to the people in real need.”

Tennis Queensland President Ken Laffey said Tennis Queensland was delighted to be given the opportunity to work in cooperation with Tennis Australia and the Australian Open to raise money for the Premier’s Disaster Relief Appeal through Rally for Relief.

Tennis Australia Vice President Ashley Cooper said it was wonderful to work together and play a small part in the overall money donated to the Premier’s Disaster Relief Appeal.

“It has been wonderful to see the entire tennis community come together to assist those affected by the floods. We hope this money helps positively impact Queensland families in the process of recovery.”