Novak Djokovic set up a final showdown with world No.1 Rafael Nadal and seized Roger Federer's No.2 ranking with a three-set victory over the Swiss at the Indian Wells Masters. 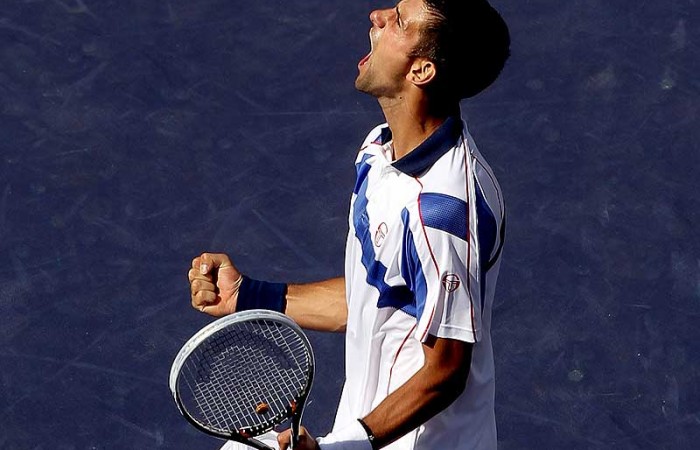 Novak Djokovic set up a final showdown with world No.1 Rafael Nadal and seized Roger Federer’s No.2 ranking with a three-set victory over the Swiss at the Indian Wells Masters.

The red-hot Serb’s recent domination of Federer was telling as Djokovic reeled off the final four games for a 6-3 3-6 6-2 semi-final triumph on Saturday.

The victory extended Djokovic’s winning streak to 22 matches, including a 17-0 record in 2011, while all three of Federer’s defeats from 21 matches this year have come at the hands of the Australian Open champion.

“It (the No.2 ranking) is the crown for my achievements this year … I think I deserve it,” Djokovic said.

“I’ve played the best tennis of my life in the last three months. I have been very dedicated, very professional, and I want to keep on going.”

The match was full of twists and turns before Federer completely unravelled after a rowdy spectator upset his rhythm and focus during a pivotal fifth game in the deciding set.

After breaking back for 2-2 and going ahead 40-15 amid a run of 10 points won from 12, Federer inexplicably dropped the next 11 points himself to hand Djokovic the match.

“It was a very close match. A lot of emotions. You could feel the intensity,” Djokovic said.

“My approach to the matches against Roger is maybe different than it was in the past two years.

“Right now I kind of have more self-belief when I step on the court against him. Before it was, ‘Let’s hope that I can play well.'”

Fittingly, Djokovic now has the chance to bring down Nadal in the title match after the world No.1 snapped a three-match losing run against Juan Martin del Potro with a 6-4 6-4 victory in Saturday’s first semi-final.

After falling behind 3-0 in the opening set, Nadal blasted four aces and won 81 per cent of his first-serve points to advance to within one win of his first title since Tokyo last October.

“After that (slow start), I started to put more balls inside, play higher to his backhand, and trying to get the right rhythm,” Nadal said.

“I did well. I played a few good games. He had a few more mistakes than usual. That helped me a little bit.

“In general, I think I played my best match in Indian Wells this year by far.”