Caroline Wozniacki blitzed Marion Bartoli in straight sets to storm into the final of the WTA Qatar Open here on Friday. 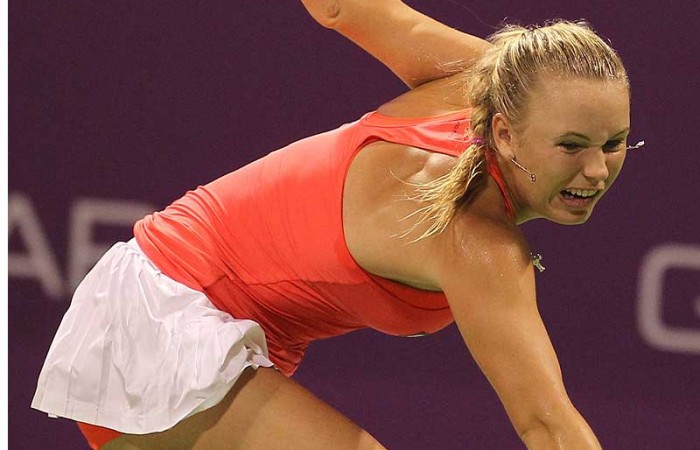 Caroline Wozniacki blitzed Marion Bartoli in straight sets to storm into the final of the WTA Qatar Open here on Friday.

The world number one, who has been hardly pushed in Doha, once again came up with a commanding display to post a 6-1 6-1 win and stay on course for a second title inside seven days, following her victory in the Dubai Open last Sunday.

Wozniacki will meet Russian Vera Zvonareva in the final after the Russian prevailed over Serbian Jelena Jankovic 6-1 2-6 6-4.

Wozniacki said she stuck to her strong point, which is her aggression, to dismantle Bartoli’s game.

“It was important for me to start aggressively and keep the momentum, make her run a lot,” said Wozniacki, who won in just 65 minutes, converting six of her eight break points and committing just 13 unforced errors compared to her rival’s 23.

Wozniacki was on a seven match winning streak when she took the court on Friday, but had lost her two previous clashes against the Frenchwoman, in Stuttgart in 2009 and in Cincinnati last year.

But Bartoli’s hopes of a hat-trick of wins against the current hottest player in the world vanished in a jiffy as the Dane established control over the match from the outset, hitting powerful winners on either flank and hardly allowing her rival any space to place her shots.

Wozniacki’s focus and aggression over the past couple of weeks has been so intense that she was asked what would her tactic be if she were playing against herself.

“What would I do? Why would I tell that? Because, I mean, you know, I would put up the white flag and say, ‘I don’t want to play’,” smiled the Dane.

“But I definitely feel like I’ve got some more power in there, and I’m making the right choices.

“I definitely feel that the balls that are coming back are different because I’m hitting the ball better now. I think so. I think I’m improving all the time.”

Bartoli conceded she had absolutely no chance against the top seed.

“Well, but, you know, Caroline is No. 1 in the world, so you expect this kind of performance. So that’s why she’s also there,” Bartoli said.

“That’s because she’s not giving you a lot of things, so you have to work really hard for each point. And even when you work really hard, she can come up with some great passing shots.

“Honestly I think she was just too good tonight, and I was doing much more mistakes than usual because she was putting so much pressure on the defence that it was forcing me to go for more and more and more, and I was missing more.”

Zvonareva, who had played a three-setter against Daniela Hantuchova in the quarter-finals, was trailing 40-0 in the ninth game of the third set, but staged a splendid rally to save three break points, two from aces, and take a crucial 5-4 lead.

The Russian second seed then put pressure on Jankovic’s serve in the next game, a fine crosscourt shot giving her a 40-30 lead before passing her at the net to finish off the match in style.

“Playing against Jelena is always tough,” said Zvonareva, who added that she wasn’t too worried about the score when she was trailing 0-40 on her serve in the ninth game.

“I never bother about the score. When you are playing the third set in a match you have to stay focused all the time and play the best you can.”