Roger Federer earned a chance of regaining one of his titles, and an early revenge upon Novak Djokovic, by reaching the final of the Dubai Open on Friday. 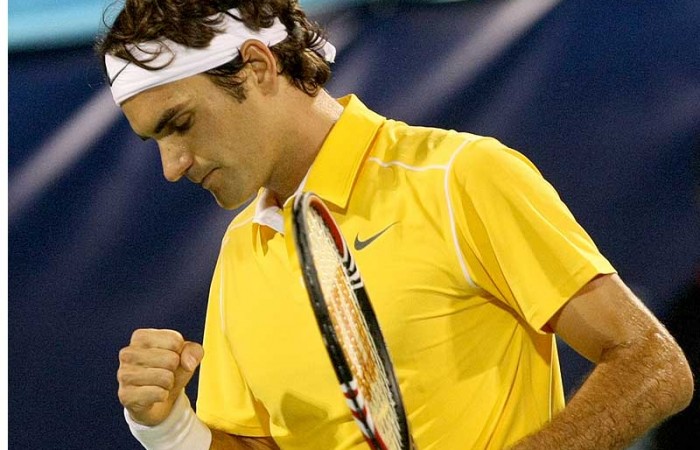 Roger Federer earned a chance of regaining one of his titles, and an early revenge upon Novak Djokovic, by reaching the final of the Dubai Open on Friday.

Federer, without a Grand Slam title for the first time in eight years, overcame Richard Gasquet, the gifted Frenchman who once beat him as a teenager, by 6-2 7-5 to earn a second meeting with Djokovic inside four weeks.

It was the Serbian who beat the Swiss maestro last month in Melbourne before making off with his Australian Open title, and it is Djokovic who holds the title here as well.

“It’s a huge obstacle to play Novak,” admitted Federer, who may nevertheless have been encouraged by Djokovic’s struggles in getting past Tomas Berdych, the man who beat him at Wimbledon but who retired with a thigh injury in the final set.

Djokovic, playing in hot temperatures, described his own performance as a “catastrophe”, even though there was no doubting his desire and determination as he survived by a scoreline of 6-7 (5-7) 6-2 4-2 30-love retired.

Federer by contrast played in the cool of the evening, when the air was thicker and the ball less fiery, which probably helped the top-seeded former champion to produce moments of beautifully controlled magic.

Federer also had an extra gear, which became evident only when Gasquet’s level rose in the second set, thanks to fewer unforced errors and improved rhythm with some flamboyant ground strokes.

They helped the former world number seven to take a 5-3 lead, but they also goaded Federer into a trampling performance in the next four games, during which he allowed Gasquet only four more points.

He then celebrated victory with a well-practised wave and a half-smile which suggested his mind might already be on what was still to come.

The crowd was disappointed for many of them thought Gasquet could take it to a decider, but those were not entirely the Frenchman’s sentiments.

“I arrived with no practice, and with a shoulder injury, so I’m playing better and better,” he said.

Djokovic by contrast described his performance as “the worst of the year,” adding that he thought he “was just fortunate to go through.”

He had problems with his footwork, laboured throughout the first set, and his ground strokes, particularly on the backhand side let him down far more often than usual.

But the Serb’s desire to win and his serve did not. Nor did the intensity of his support from a gaggle of noisy expatriates. Once they started cheering before Berdych had completed an attempt to run the ball down, causing the Czech to complain, and prompting the umpire to tell them “please don’t shout.”

Djokovic needed all this passion to prevent Berdych breaking back at 15-40 in the fifth game of the second set, and this escape by the champion probably quashed the the third seed’s last real hopes.

Asked to compare Saturday’s scenario with the semi-final at the Australian Open, Djokovic pointed out that the conditions would be very different.

“In Australia (it was) really slow conditions, slow surface, ball bounces a bit higher. So it was more suitable to me.

“Still, I’ve played well over the years in this centre court, especially in night matches. So I look forward to it. It will be a big challenge.”

Federer, clearly in the better form, sounded the more assertive.

“I have another opportunity to win a tournament, so it’s a good moment for me. I want to win, it doesn’t matter how.