Jelena Dokic bowed out in the first round of the Dubai Championships but Australian compatriot Jarmila Groth progressed by beating Dominika Cibulkova. 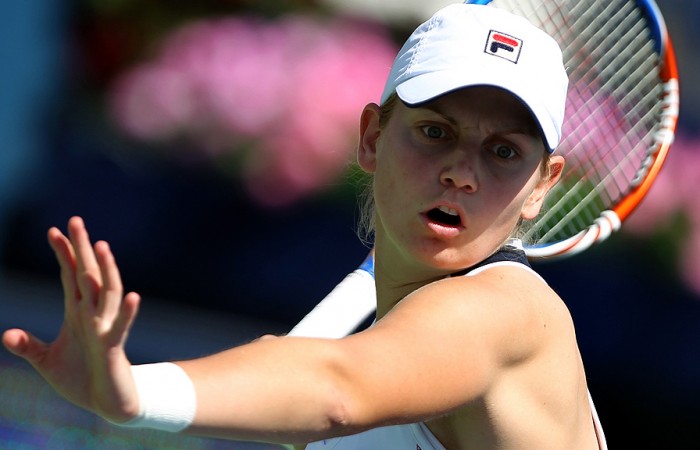 Jelena Dokic bowed out in the first round of the Dubai Championships on Wednesday but Australian compatriot Jarmila Groth progressed by beating Dominika Cibulkova.

Pennetta, who reached the fourth round of the Australian Open and won her first doubles title there, took advantage of a string of unforced errors and 11 double faults from Dokic.

“She can play good tennis but she made a lot of mistakes,” Pennetta said.

“It’s not easy to play the first match in a tournament. And it was really windy outside. The weather, it’s really strange here.”

Peer jumped out to 3-0 in the first set only to see Martinez Sanchez come back to tie it at 4-4.

Peer won the next two games to take the set and the Spaniard, weakened by a flu, couldn’t keep up in the second set.

Peer closed it out with a blistering serve that Martinez Sanchez returned into the net.

Petra Kvitova fell to Ayumi Morita 7-6(2) 7-6 (7-4) only two days after beating Kim Clijsters to win a tournament in France.

The Czech player, who has won three titles in her career, lost for only the second time this season.

“Well, I think everything was bad for me,” said Kvitova, who is ranked 14th in the world.

“I was tired and I felt everything. I couldn’t serve too much because I’m feeling the muscle in the stomach. Yeah, I was slow and tired, so it was tough to play.”

The Slovak became dizzy for a time, saying she “couldn’t keep track of the score” at one point, before losing to Anna Chakvetadze of Russia 6-1 6-3.

Another surprise loser was former No.1 Ana Ivanovic, who fell 4-6 7-6(2) 6-2 to Patty Schnyder of Switzerland.

The 14th-seeded Serb was in control after winning the first set and leading 3-1 in the second but collapsed amid a wave of unforced errors and double faults.

Ivanovic was broken early in the decider and again to trail 5-2 after double-faulting.

Schnyder closed out her first victory of 2011 when the Serb sent a backhand long.

“It feels great especially where the [Australian Open] didn’t go that well,” said Schynder, who lost in the first round in Melbourne.