Kim Clijsters became the first mother to be crowned world number one on Friday when she beat Australia's Jelena Dokic 6-3 6-0 in the Paris Open quarter-finals. 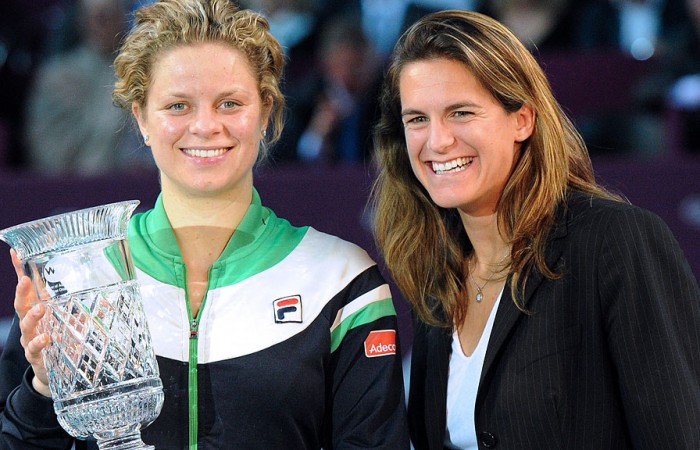 Kim Clijsters became the first mother to be crowned world number one on Friday when she battled back from 3-0 down to defeat Australia’s Jelena Dokic 6-3 6-0 in the Paris Open quarter-finals.

The 27-year-old reigning US and Australian Open champion has now reached the top spot for the fourth time in her career.

The Belgian first hit the heights in 2003, when she was number one for 12 weeks over two separate spells, and then again in 2006, spending seven weeks at the head of the rankings.

Clijsters, who was also US Open champion in 2005 and 2009, will officially knock Denmark’s Caroline Wozniacki, who has yet to win a Grand Slam title, from the number one slot when the new WTA rankings are released on Monday.

“It’s incredible to have been successful so quickly after my comeback,” said Clijsters, who had retired in 2007 to start a family before returning to the tour in 2009 after giving birth to daughter Jade.

“I have been playing really well for some months now. I am happy to regain the number one here in Paris as I feel like it’s close to home in Belgium – the last time, it was in Los Angeles.

“I’m proud that I have achieved this in my second career and as a mother. I hope that I can now go on and win the tournament.”

Clijsters’s return to the top will bring a little respect back to the position which has lost some of its lustre in recent years.

Clijsters has enjoyed a memorable last six months, winning all three of the last major tournaments, the US Open, Masters and Australian Open.

She also led Belgium to victory over the United States in the opening round of the Fed Cup World Group last weekend before arriving in Paris where she was champion on her last and only previous visit in 2004.

On Friday, she lost the opening three games against qualifier Dokic before reeling off the next 12.

The other last four clash will see Czech fourth seed Petra Kvitova taking on Bethanie Mattek-Sands of the United States.

It’s been 256 weeks since her last stay at the top of the rankings.

Her first 10 weeks at number one came between August 11 and October 19, 2003 with her next two weeks coming between October 27 and November 9 in the same year.

On both occasions she was displaced by Henin.

In 2006, Clijsters spent seven more weeks at number one between January 30 and March 19, before being replaced by Mauresmo, who is now the co-tournament director in Paris.

Mauresmo presented Clijsters with a giant bouquet to mark her latest achievement on Friday.

“It’s difficult to compare with 2006. I remember I was proud and emotional,” said Clijsters.

“But the circumstances are not the same. Then I had just won the tournament while here we are still in the middle of a tournament. It was a little strange getting flowers and a trophy.

“I am older now and more experienced. I can savour these things in a different way. This is what pleases me more in my “second career”.