The latest hope to emerge from Australian junior tennis has vowed to breakaway from the "soft" culture which has consigned too many of his predecessors to senior oblivion. 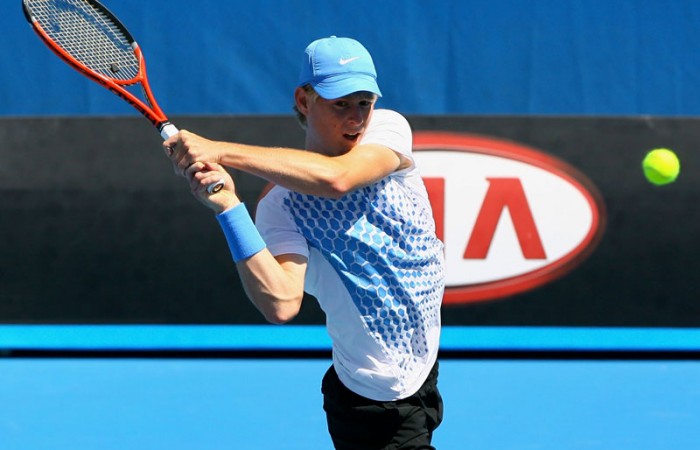 The latest hope to emerge from Australian junior tennis has vowed to breakaway from the “soft” culture which has consigned too many of his predecessors to senior oblivion.

Luke Saville is the fifth local to reach the Australian Open boys’ final in nine years, but he wants to be different to the others – he wants to succeed as a senior.

Saville, who turns 17 next week, says he feels “a little bit” of pressure as the latest great hope of Australian tennis but believes officialdom is finally heading in the right direction after years of little progress.

“Australian tennis in the past has been renowned for having a few good junior winners. But I think it would be nice to win tomorrow and then push onto seniors,” he said after a commanding straight sets semi-final win on Friday.

“I haven’t been around for too long but maybe Tennis Australia hasn’t given much support in the past possibly.

“But now I’m at the AIS it’s a great pathway for me and I think Tennis Australia is going into the right direction.

“Maybe the coaching has been a little too soft, I’m not quite sure. But I’m hoping to change that.”

“Lleyton is my biggest idol and he prides himself on his fighting abilities. So I really wouldn’t want to follow in the footsteps of the other juniors,” he said.

Apart from Bernard Tomic, the 2008 junior Australian champion and 2009 US juniors winner who is carving out a promising career in the senior ranks, Saville knows a well-credentialled junior career does not automatically translate into senior success.

Since Brydan Klein won the Australian juniors title in 2007, he has won two of the seven ATP tour matches he has played and, at 21, is currently ranked 214.

Nick Lindahl was runner-up in 2006 and is currently ranked 245, while Todd Reid, who won the 2002 Australian and Wimbledon juniors titles, reached a career-high ranking of 105 in 2004 before injuries sent him out of the top 1000 and into retirement.

Saville has already showed some of Hewitt’s fighting qualities in the past week, coming back from 2-5 down in the third set of his third round match and overcoming severe cramp in his first match.

He had no trouble in his semi on Friday, brushing aside Spanish ninth seed Roberto Caballes-Baena 6-2 6-1 to set up a final on Saturday against top seed Jiri Veseley of the Czech Republic.