Saville through to semis

Luke Saville is feeling pretty happy at the moment. And so he should. He just won his quarterfinals match and is now the only remaining Aussie in the junior boys singles draw of Australian Open 2011. UPDATED. 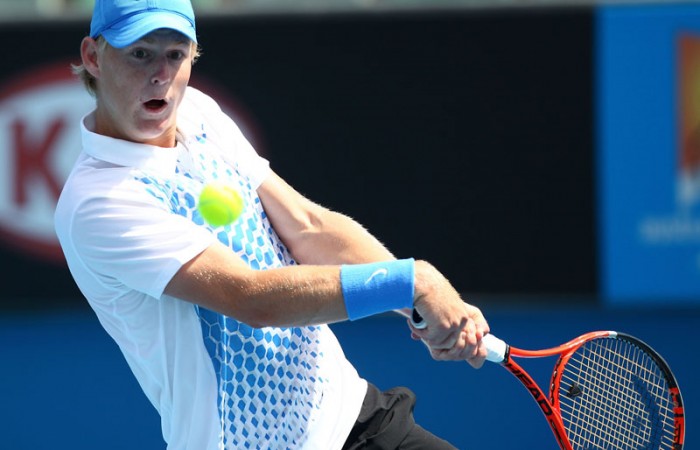 Luke Saville is feeling pretty happy at the moment. And so he should. He just won his quarterfinals match and is now the only remaining Aussie in the junior boys singles draw of Australian Open 2011.

16-year-old Saville knows that this is a big deal, but he says he is trying not to dwell on it. “It feels good. I would have liked to have a few more of my mates in the draw. But it’s nice. Last Aussie in, there’s a few more expectations and a little more pressure but I’m ready for that at the moment. I’m playing probably the best tennis of my life. It’s great to be hitting some good form here.”

The young South Australian is happy to share the limelight and the pressure with his mates. “There’s a few Aussie boys in the doubles so it’d be good if they can win that and I’ll try and do my best in the singles.”

In his quarterfinal match today, Saville fought off a very determined Lucas Pouille from France in two drawn-out sets 7-5, 7-5. Breaking each other regularly, the Aussie had to contend with windy conditions to climb ahead in the first set.

Pouille looked to have Saville’s number in the second set, up 5-4 before the young Aussie regained control of the match. He tried to block the Frenchman at the net with mostly positive results. Although Pouille was serving with incredible power and accuracy, Saville continued to break his serve. He stopped the Frenchman in his tracks coming back to take the final set 7-5.

Discussing his game plan, Saville said that he has tried to maintain consistency in each match he has played at this year’s Open. “I try to stick to my game style and my game plans and obviously they’ll match up better than others. But even if I make the final, the first and final rounds are exactly the same, I’m going to go out there with the same mindset and just take every point as it comes.”

The unseeded Aussie has had some excellent results in the last 12 months, winning in Thailand and coming runner-up at the Traralgon International two weeks ago. One of the players he conquered at Traralgon, Spaniard Roberto Carballes Baena, is his next opponent in the Junior singles semi-finals.

Although Saville won in their last encounter, he knows that he will have a fight on his hands if he is to make it all the way to the final. “He’s a good player. I played really well last week and I won in a tight match so it’s going to be a very tough match again, but like I said, I’m ready for it.”

With his current dangerous form and growing confidence in his game, it looks like Saville is more than ready.