Saville through to second round in Juniors

Adelaide young gun Luke Saville has weathered gusty conditions and an early charge from Czech Adam Pavlasek to move into the second round of the Australian Open Juniors tournament. 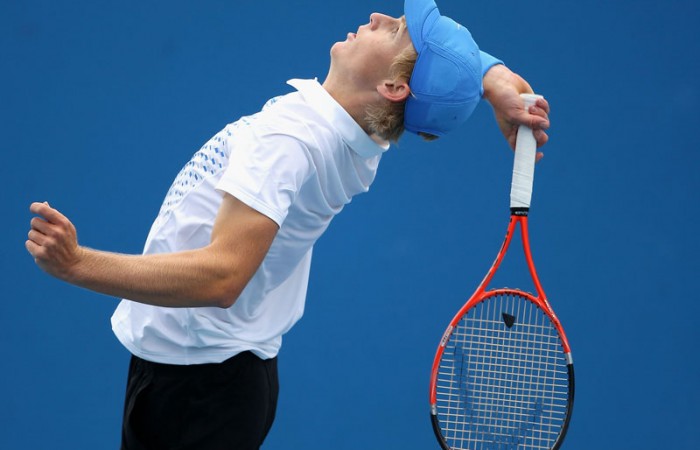 Adelaide young gun Luke Saville has weathered gusty conditions and an early charge from Czech Adam Pavlasek to move into the second round of the Australian Open Juniors tournament.

Saville got a scare in his first set, when Pavlasek stormed back from 2-5 down to even the score 5-5. But the 16-year-old Aussie held strong to edge out his opponent 7-5. Saville dominated in the second set, breaking Pavlasek three times. He found the windy conditions challenging but he held on to take the match.

The South Australian said that playing in his home Grand Slam in front of his family added some extra pressure. “I got a little bit nervous at the end of first set, I dropped a few games at the tail end of that. He made me work hard, he was a great player, great competitor.”

When Pavlasek looked to be climbing back in the second, Saville said he had strategies in place to keep his nerve. “I kept telling myself to relax, I was shrugging my shoulders a bit, taking a few deep breaths. My mind set was, I’m still up two break points here. I just kept a level head in that last service game and I managed to serve it out.”

Meanwhile, Aussie hopeful Jack Schipanski was pushed out of the tournament by hard-hitting German Patrick Elias in two sets. Schipanski started strong in the first set, forcing Elias into a tie-break that he eventually won 7-6(3).

The 16-year-old said that he was happy with how he started the match, but was unable to maintain that good form. “Early on I was pretty nervous but I kept my emotions under control so I was happy with that. I thought I served well and really stuck to my game plan.”

The Aussie also had to contend with blustery conditions on Court 13 in the second set. This coincided with a boost in the German junior’s confidence which saw him hitting some huge forehand winners from the baseline. Schipanski said that he made mistakes that allowed Elias to take charge. “I think I just, at times started to rush myself a little bit and tried to finish points a bit too early which led to a few too many unforced errors.”

The German was too good in the end, taking the second set 6-2. Although he is disappointed that he didn’t win on home soil, Schipanski, who has a junior ranking of 210, is busy focusing on his immediate future. “I think the early part of this year I’d like to get my junior ranking up a lot higher than what it is at the moment so I can play the junior Grand Slam’s and try and play the French and Wimbledon and also the US.”

Second-seed Junior, Dominic Thiem from Austria had a tough first set against American Dennis Novikov. The Austrian couldn’t climb above the American in the first set, but came out fighting to take the following two sets 6-4, 6-3. Favoured Spaniard Roberto Carballes Baena was running hot on cold on Court 19 as he held on to beat Austrian Patrick Ofner 6-1, 1-6, 6-1.