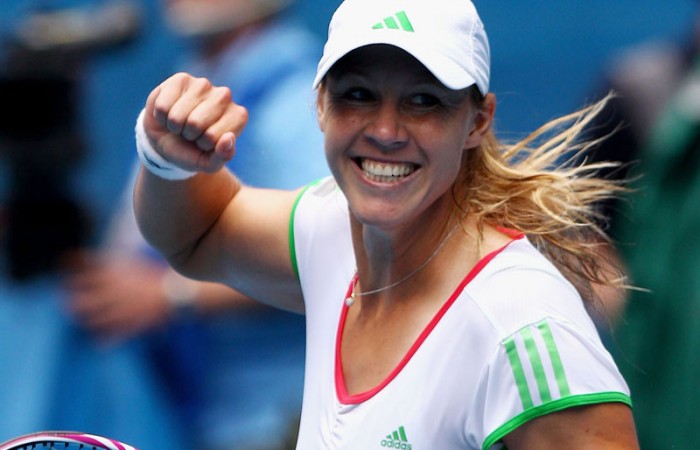 As five other Australians bombed out, Stosur and Tomic each posted watershed wins to boost local spirits before Molik electrified the crowd at Rod Laver Arena with a memorable triumph over Roberta Vinci.

The Italian served for the match at 5-4 in the deciding set, but Molik refused to yield and was rewarded with a 1-6 6-3 8-6 success and a second-round date with Russian 13th seed Nadia Petrova.

“Roberta and I go way back to 16s and under and 15 years on and I finally got her,” Australia’s 2005 quarter-finalist said.

“This was my old stomping ground, so I was trying to search for those memories, those great memories of four, five years ago. I dug deep.”

It was the most lopsided victory of Stosur’s nine-year-grand slam career and thrust the Open runner-up into a second-round clash on Thursday with either Russian Vera Dushevina or Italian Maria Elena Camerin.

The fifth seed belted 20 clean winners and dropped only five points on serve all match.

“Very pleased to come out here and play like that in my first match,” Stosur said as she set her sights on breaking Australia’s 33-year home major title drought.

“It takes a lot to win a Grand Slam. Everything has to fall into place for two weeks.

“So it’s going to be tough, but I’m going to give it my best shot.”

Tomic claimed the biggest scalp of his burgeoning career to reach the second round for the third successive year.

Playing at a career-high world No.199, Tomic was much too classy for his more-experienced French opponent, breaking Chardy three times and not dropping his own serve during the entire match.

The two-time junior grand slam champion unveiled a vastly-improved serve, recording a fastest delivery of 201kph, to impressively book a second-round date on Thursday with Spanish No.31 seed Feliciano Lopez.

“It is the greatest feeling just to play in this tournament,” a jubilant Tomic said.

One more win would likely pit Tomic into a blockbuster third-round encounter with world No.1 Rafael Nadal.

There was no joy for the rest of Australia’s contingent on day two, with fellow wildcards Sally Peers, Sophie Ferguson, Matthew Ebden and Carsten Ball plus Anastasia Rodionova all perishing.

Ferguson was in tears after blowing three set points in the first-set tiebreaker of her 7-6 (8-6) 0-6 6-3 loss to Croatian qualifier Petra Martic, while Italy’s 22nd seed Flavia Pennetta hammered Rodionova 6-2 6-1.