The Australian Open's inaugural Kids Day has been a massive success with thousands of kids flocking to Melbourne Park to join in the fun. 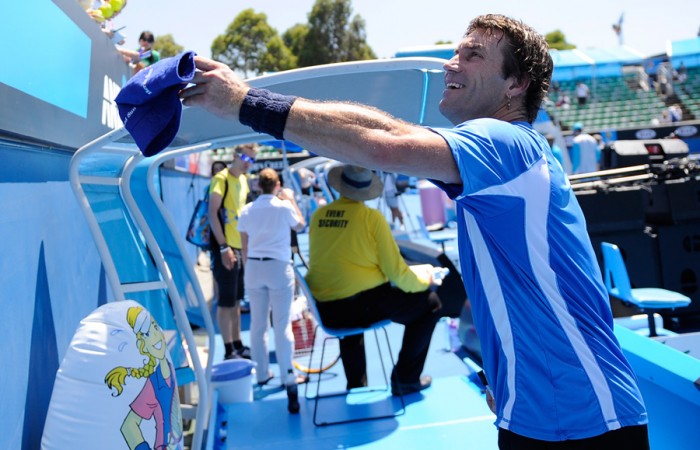 The Australian Open’s inaugural Kids Day has been a massive success with thousands of kids flocking to Melbourne Park to join in the fun.

The sun was shining in Melbourne today, and so were the kids, as they poured through the gates at 9.30am ready to experience all of the excitement that they could handle. They were treated to an array of activities at the Fan Zone and Autograph Island while the queue for the Kids Craft Tent snaked around Garden Square towards Rod Laver Arena.

The Stringer’s Hut gave kids the opportunity to observe the stringers in action and gave them a chance to try their hand at stringing a tennis racquet, while the Caricature Tent was a popular choice with kids posing for funny pictures they could take with them.

The stars took part in several inventive games including one that tested their aim as well as an actual scored match. Lukas Bellesini from Australia’s Got Talent-winning dance troupe ‘Justice Crew’ showed that he needs to do some work on the tennis court. Hitting most of his shots either high in the air or into the crowd, it provoked competitor Henri Laconte to ask, “Are you trying to hit the birds?”

Taking time out from her preparations for her first round clash with Italian Roberta Vinci, Molik said that Kids Day provided an opportunity for youngsters to build their interest in the game.

Aussie hopeful Luczak remembers coming to the Open when he was young and said Kids Day is a great way to foster talent.

“This is where it all starts. I know when I got to hit with some of my idols when I was growing up it made a huge difference and you’d be inspired for a few months, so hopefully they enjoyed… watching us play and getting involved, I think it’s great.”

Cash said he was happy to be involved with Kids Day as it helped promote the sport to a younger generation.

“We desperately need kids to be picking up tennis racquets. There’s lots of Aussie rules footballs and netballs and soccer balls being kicked around but we want tennis balls being hit. It’s a great sport for life. You can’t play Aussie rules your whole life, you can play tennis till you’re 70 or 80.”

Despite the huge cheers from the crowd, the 1987 Wimbledon champ thought that kids didn’t really know who he was.

“It’s great that the mums and dads kind of know me and go, ‘He used to wear that head band and he won Wimbledon’.” And the kids response? “Huh, who is he?”

But nine-year-old Tim Buxton from Box Hill knew exactly who Pat Cash was.

“Only because of the guns,” she said.

The group are all big tennis fans who have given Kids Day the thumbs up. Asked about their favourite activities today, the consensus was that watching past and present legends was a particular highlight.Tim is already a champ-in-the-making at Box Hill North Tennis Club, and said he hoped to one day make it all the way to Rod Laver Arena.

If these kids are a sign of what’s in store for Australian tennis, then the future is looking bright.